Following the massive success of Museum LIVE over the past two years, Saturday 05/11/16 will see the museum host our 3rd annual free open day when everyone will be invited to visit the museum collection free of charge.

There will also be a host of other free attractions including our amazing “stars on stage” feature which is presented in association with wheel builders to the museum, Central Wheel Components Ltd

Museum Director James Hewing commented:  “Utilising our conference venue that adjoins the Museum we are planning another great open day event in some of the most prestigious surroundings you can imagine.  After the huge success of our second Museum Live event in 2015 we decided to make this an annual free day for all the family to enjoy.”

Free Museum Entry: Everyone will be invited to visit the newly reconfigured museum collection, free-of-charge.

If you think you’ve seen the museum before-think again!

Meet The Experts: In attendance will be some of the museum’s specialist suppliers, craftsmen, and related personalities (including our own restoration team) who will be available to chat and answer questions. Also unveiled at the event will is an exciting new permanent display “the history of wheel building” presented by wheel builders to the museum, Central Wheel Components Ltd.

Indoor Autojumble: The event will feature a large indoor autojumble held within the warm & dry surroundings of the National Motorcycle Museum’s conference facilities. For details of how to book a 6ft pitch for just £30.00 contact Steve or George on (0121) 704 2784 or e-mail sales@nationalconferencecentre.co.uk

The event will also feature trade stands & displays from many well-known names including Footman James insurance brokers and Bonhams auctioneers.

Museum Partners & Trade Displays: In attendance will be some of the museum’s specialist suppliers & craftsmen (including our own restoration team) who will be available to chat and answer questions. Also unveiled at the event will is an exciting new permanent display “the history of wheel building” presented by wheel builders to the museum, Central Wheel Components Ltd.

Catering & entertainment: The Museum shop and restaurant will be open throughout the event. A wide variety of catering will be on offer including breakfast, lunch, a range of hot meals & snacks.

UPDATE – In addition to the museum restaurant, this year’s event will feature :

The Bracebridge Suite: Licensed bar with entertainment from jazz band “The Moonlight Trio”.

The Ballacraine Suite: New Food Hall with lots of great dishes freshly prepared by our chefs including our famous Katsu curry!

BBQ: There will also be a BBQ with lots of delicious favourites prepared by our own chefs.

Museum Shop & Restaurant: The Museum shop and restaurant will be open throughout the day serving breakfast, lunch & a range of hot meals & snacks.

Celebratory Book Signings: Famous motorcycling personalities will be available to sign copies of their books in the Museum shop during the event.

Held on the stage in the museum’s magnificent Britannia suite these free 1 hour chat shows will feature Carl & Jamie as well as other motorcycling personalities. Appearing courtesy of Phil Morris Racing, two of these very special guests will include TT superstar IAN HUTCHINSON & British Superbike front runner & Moto GP star JAMES ELLISON. All our guest stars will also be making personal appearances to sign your favorite memorabilia. Motorcycle journalist and author Frank Melling will also be giving a talk on his life in bikes and his two recent autobiographies.

Our star riders will be “riding” & posting their fastest times our new Manx TT arcade machine! Can you beat them? 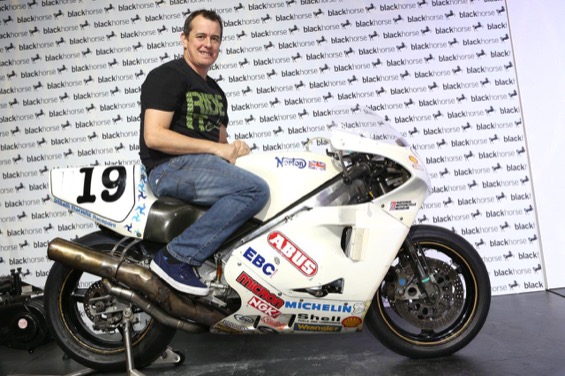 NEW FOR 2016! – Museum Live “Start Up” Feature: See & HEAR some of the most famous race machines in the world started up in our special LIVE START UP area. Bikes old and new will include the Hislop “White Charger” Rotary Norton, NVT Cosworth Challenge, Vincent “Super Nero” sprinter, the Phil Morris Racing owned 2012 ART GP12 Moto GP bike (ex-James Ellison), plus many others including genuine Moto GP Ducati’s and WSB machinery-not to be missed! 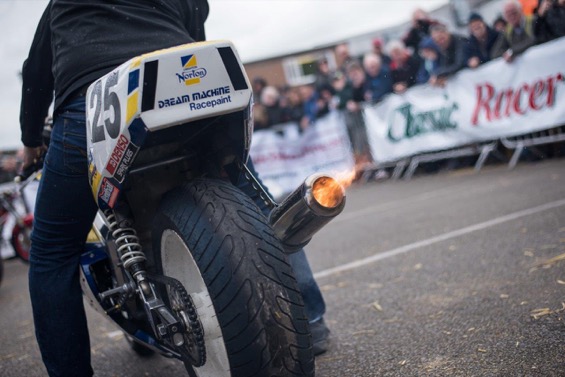 Museum Bikes That You Can Hear “Fired Up”-

Thanks to Phil Morris Racing, The Brackley Festival Of Motorcycling & Mike West Racing (amongst many others) for providing our guest machines.

Plus the draw for the best classic motorcycle raffle prize in the world: Our summer 2016 raffle to win a 1990 Norton Rotary F1 worth over £22,000 will be drawn by one of our celebrity guests live on stage during the afternoon of the event on 05/11/16.