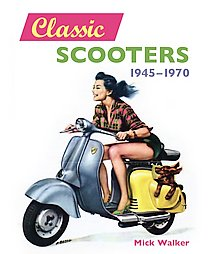 The motor scooter, so familiar a sight on the streets of cities throughout the world, can trace its ancestry back to the early years of the Twentieth century, but it really came into its own after the Second World War. In Italy the Piaggio company launched the Vespa that quickly became a by-word for quick, cheap and chic urban personal transport. The Lambretta soon followed, along with dozens of rival scooters from manufacturers all over Europe. North America and Japan, including some famous names as Ducati, Heinkel, Triumph, Puch, Honda and Harley-Davidson.