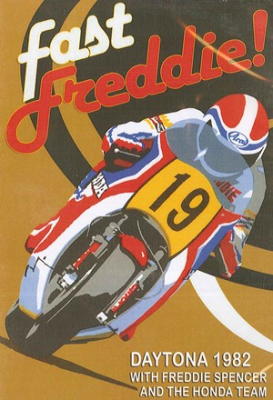 DVD Fast Freddie Daytona 1982
Freddie Spencer is one of the true legends of motorcycle racing, capturing three World Championships and earning himself the nickname Fast Freddie with his awesome skills and undoubted speed.
After bursting onto the international scene in 1982, when he became the youngest Grand Prix winner ever, Fast Freddie secured his first World Championship at the end of sensational season of 500cc GP racing in 1983.

His success came as no surprise to fans in his native USA – they had already seen Frederick Burdette Spencer Junior was going to take some beating on just about any race track.

This DVD features three films – Fast Freddie, Daytona superbikes and Goin For It – which capture the man who would become a legend in Stateside action. In each he demonstrates the sublime skills and dogged determination which would make him a household name.

From the classic Daytona 200, where Spencer on the Honda FWS V-4 diced with Kenny Roberts on the works Yamaha OW54, to the American Superbike Championship round which saw Spencer in all-out dogfight with Eddie Lawson – this DVD has it all.

Experience the incredible thrill of Spencer and Roberts just inches apart at over 180mph on the Daytona banking and study the unbelievable skills of Americas Superbike kings as the casually drift their 120bhp-machines.

This DVD features plenty of examples of why Spencer was destined for greatness – remounting just seconds after a high-speed crash in the rain, taking time at racing pace to warn a teammate of tyre problems, retaining a calm, self-appraising attitude off the track and many more illustrations of the determined, skilful and controlled character which would take Fast Freddie to World Championship success.