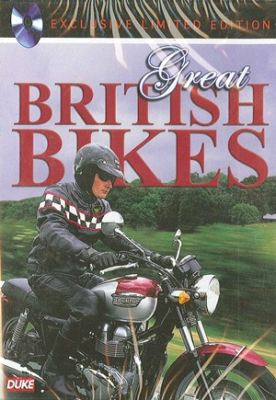 Great British Bikes DVD
Over the last 100 years, British bikes have been among the most desirable on the road. Indeed, for much of the twentieth century, British motorcycles ruled the world.

Here, in this magnificent tribute, we pay homage to ten of the most charismatic motorcycles from the Swinging Sixties – the decade when the industry was at its zenith. We focus on the road and racing bikes most admired and aspired to, ranging from high performance singles through parallel twins, vee-twins-and even a unique square four. Join us as we celebrate the golden age and lasting memory a these Greatest British Bikes:

BSA/Triumph Triples – The BSA Rocket Three and Triumph Trident were a match for any opposition in the Formula 750 class racing of the era.

Norton Commando – One of the best bikes ever made in England. Superb on the road and a winner on the racetrack.

Manx Norton – Kept the British presence alive in Grand Prix racing for 40 years, winning many Isle of Man TT races and world championships along the way.

Vincent Black Shadow – The high specification of Vincents legendary machines ultimately led to the companys downfall as only the most affluent enthusiasts could afford them.

Velocette Thruxton – The end of a line of strong sporting singles from the Birmingham company, and a winner in International Endurance races.

Ariel Square Four – The only four-cylinder machine ever put into volume production by a British manufacturer. It could go from 10 to 100mph in the top gear!