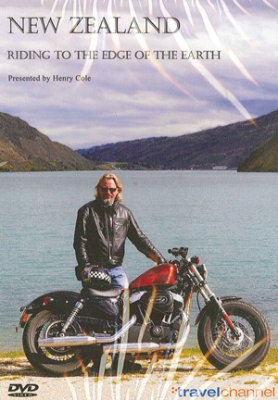 New Zealand – Riding To The Edge Of The Earth DVD

New Zealand – Riding To The Edge Of The Earth DVD

New Zealand – Riding To The Edge Of The Earth DVD
New Zealand – home to some of the most spectacular scenery on earth. A place that holds almost mythical status with any biker that has ridden its roads, experienced its culture and revelled in its landscapes.

Henry Cole climbs aboard his Harley Davidson 48 to ride this fabled land. He sets out from Auckland to ride some 3,000 miles through The North and South Islands to Journeys end in Queenstown.

Along his ride on the North Island Henry catches up with bikers like the Legendary Kiwi Racer Graeme Crosby, flies to an active Volcano, release a Kiwi bird, experience the Maoris ancient culture, join an Art Deco festival in Napier and explores the delights of cities like Auckland and Wellington.

Crossing to the South Island from Picton Henry hooks up with another sixty or so kindred spirits on their bikes to ride to Nelson. Then its onto the delights of rural small town New Zealand in Murchison before heading west to Cape Foul Wind. From Greymouth to Fox Glacier the rain and the scenery gets bigger and bolder. This is a taste of whats to come as Henry heads to Queenstown and beyond to explore the Southern Scenic Route and Fjordland. Henry then loops through an area called The Catlins up to Alexandra and back to Queenstown. In total, Henry will have covered over 3,300 miles of some of the best roads New Zealand has to offer. But as ever the question remains: Will New Zealand deliver one of the Worlds greatest motorcycle rides?