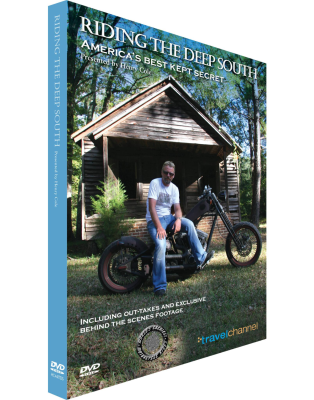 In this one hour special presenter Henry Cole continues his quest to discover the greatest motorcycle rides in America.

If there is one route that can truly be described as one of Americas’s fast wildernesses it has to be The Deep South, a vast landscape where humans rub shoulders with over a million alligators and the stifling heat,swamps, unpredictable tropical weather and sparsely populated terrain evokes a real sense of discovery and adventure.

Again Henry clambers aboard one of the msot radical American semi custom choppers available off the shelf , a Saxon Crown to behis companion on this epic journey.

The ride starts in America’s most southern point in Key West Florida heading up US Route 1 for two hundered miles along some of the most beautiful coastal riding traversing the ribbon of bridges that link The Key’s over sun kissed azure blue water.

After by passing Miami the route leaves the modernity of the city behind and heads into Florida’s virtually undiscovered interior riding through the sweltering and virtually uninhabited swamps of the Everglades.  After a brief stop in Everglade City its then on up via Naples deep into Florida’s interior to Tallahassee, Florda’s state capital/

Leaving Florida behind the joys of Alabama’s stunning country side and incredible roads are revealed then on through Mississippi into Louisiana picking up the original Easy Rider route, where the iconic movie was filmed,down Louisiana Highway 1 to journey’s end in New Orleans.

There can’t be many routes through America’s Deep South-will this ride be an undiscovered joy or will there be some very good reasons why its total length of some 2000 miles is often unpopulated,unexplored and has a reputation for alcohol fueled rednecks being not entirely hospitable to outsiders especially those on custom chops?!