Menu
Online sales via our web shop remain operational. This includes all retail goods, Bruce Main-Smith Technical literature and online raffle sales. However, please note that we will be unable to dispatch goods ordered until Thursday 04/06/20. This will also include confirmation of your on-line raffle entry. The National Motorcycle Museum values your support very much at this difficult time, please rest assured that we will dispatch all goods ordered as soon as we are able. For any queries please contact shop@thenmm.co.uk 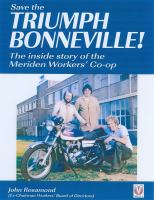 Save The Triumph Bonneville (Hardcover)

Save The Triumph Bonneville (Hardcover)

Save The Triumph Bonneville
Save the Triumph Bonneville – John Rosamond
There is no more famous motorcycle than the Triumph Bonneville, the Bonnie, the best motorcycle in the world, and the Meriden factory producing this icon was a personal Mecca to fans of the marque. Film stars such as Steve McQueen visited Meriden for their Triumphs. But on the brink of what should have been its biggest ever sales season, the BSA parent company dramatically collapsed. The Conservative government reacted, and Norton-Villiers-Triumph was created. The new owners decided to close down Meriden…so the workers locked them out. There followed protracted political negotiations, affected all the while by national government changes, ministers attitudes, national and international economic conditions and, throughout all this, the worlds continuing desire for the Triumph. As much a study of changing political attitudes as of an economically traumatic time for both Triumph and the country, socialist John Rosamonds unique position within the workers co-operative makes this work a fascinating account of a story never before told from the inside.