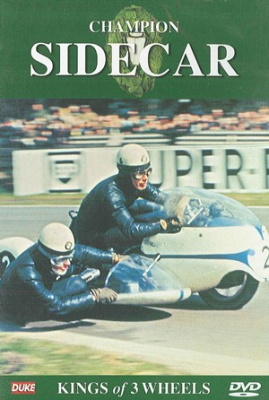 DVD Sidecar
Ever since the development of machines with two-wheels, there have been racers who have wanted to literally go one further, giving rise to one of motorsports most thrilling – the sidecar race.
This 65 – minute programme pays tribute to the greatest sidecar stars from the 1940s to the present day with extensive archive and modern racing footage (including some excellent on-board film), background stories and revealing interviews.

Over 50 years or so, sidecar outfits changed from crude platform boneshakers to sleek, aerodynamic projectiles based on F1 car design. As we re-trace the careers of these champions. Director David wood also illustrates the technical developments in the sport. A fascinating record of an excellent motorsport.

Fritz Scheidegger – This Swiss rider brought an end to the supremacy of the German sidecar drivers, winning two World Championships.

Jock Taylor -1980 World Champion; a TT great with four titles and one of the most popular stars in sidecar racing history.

Steve Webster MBE – Four times World Champion in 5 Years, and archrival in the 80s & 90s of�