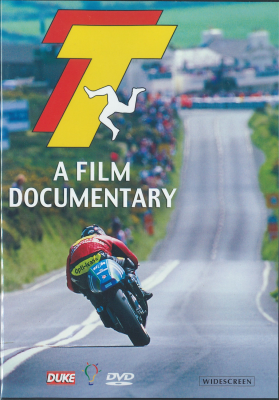 TT A Film Documentary DVD
The Isle of Man TT is phenomenon, the toughest test of man and machine – pitting the talents and bravery of some of the greatest motorcycle racers ever against 37.73 miles of awesome tarmac. In 2003 director Andy Stickland got closer to the event than ever before – the result was the evocative TT: A Film Documentary.

With its bold, candid style, TT: A Film Documentary captures a turning point in the TTs history. With the spotlight on its future, the extremes of this emotional roller coaster were on display in 2003. From fantastic racing, captured in sublime footage, to the tragic loss of TT favourite David Jefferies – the no holds barred documentary charts the whole story.

Uniquely, the documentary goes beyond the racing and face of the festival, for the first time bringing together all the sights, sounds, people and passion. Radio TT commentary, intimate interviews, unprecedented access and a stunning soundtrack – featuring the likes of Coldplay, Oasis, Slade and more – make this an incredible record of a pivotal year in the events heritage.

TT: A Film Documentary captures the essence, passion and atmosphere, with contributions from leading riders including John McGuiness, Adrian Archibald and Ian Lougher, the unique perspective of six-times TT winner Geoff Duke and the views of the many characters who make the TT what it is.

In this new directors cut, Stickland has updated his amazing documentary, which now features almost 15min of extra footage, and created a brand new film – The Directors Return, in which Stickland revisits the Isle of Man to find out how the event has changed ahead of the Centenary races in 2007.

He catches up with leading riders, the characters who contributed so much to his film and the Isle of Mans very own Richard Milky Quayle – whose career – ending smash was so graphically captured in the documentary. It also reflects on the tragic loss of some familiar faces – just like the original film, it fearlessly examines every facet of what makes the TT unique.