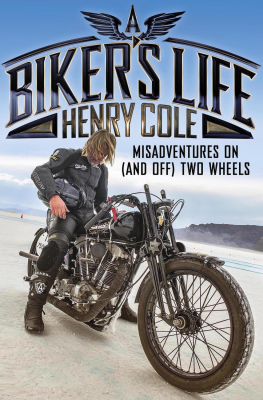 A BIKER’S LIFE is the dramatic, humorous and candid memoir of one of the most

Henry Cole’s passion for motorbikes began when, at the age of eight, he was first

introduced to a ‘man cave’. His great-uncle Redbeard’s corrugated iron shed was ‘stuffed

to the gills with old motorbikes’ which Henry helped rebuild and ride. Since then, Henry’s

education, via many years battling addiction, to the big-sky iconic routes Henry has

ridden for over twenty series as presenter of numerous TV shows.

exactly who they want to be: to say ‘Fuck you, fuck the world, I’m doing my thing.’ When

those of us who will not be pacified by driving a car, but instead live for adventure,

escape and the sheer thrill of the throttle.