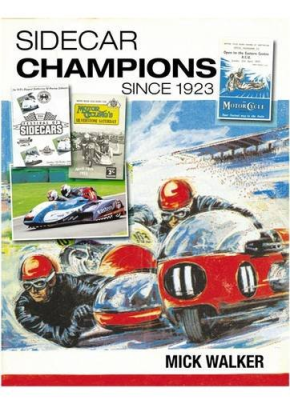 Sidecar Champions since 1923 by Mick Walker

Mick Walker – leading authority on all forms of motorcycle sport – sets out to cover the worlds leading sidecar competitors, in no less than 26 chapters, plus the usual trademark boxed-sections covering several other notable sidecar competitors. Sidecar Champions is the ninth in a series which sets out to cover the worlds leading motorcycle competitors. It is also the first to cover more than a single personality in one book. It has also been the most difficult project that author Mick Walker has undertaken during what is now over a quarter of a century of writing. There are no less than 26 chapters, plus his usual trademark boxed-sections covering several other notable sidecar competitors. It was also a subject which he had wanted to cover for many, many years, because he had always thought that the sidecar boys (and a few girls!) seemed to get a raw deal, both with the organisers and the press, when in actual fact the sidecar event was often the highlight of a days racing and were generally loved by spectators. Once the motorcycle had become firmly established, the next question was how could it carry more people? The earliest examples of the sidecar arrived just after the turn of the 20th century, and by 1903 a couple of firms were already offering them for sale. Most sidecar bodies during these pioneering days were of wicker work construction, mainly in an attempt to keep weight to a bare minimum. Racing and record breaking with sidecars began during the period immediately following the end of World War One. And manufacturers saw this as an ideal way of promoting their products. Record breaking was particularly popular during the 1920s, with venues in several countries including Montlhery (France) and Brooklands being by far the most popular. The first sidecar world records in the 350cc category were established in 1922 by Cyril Pullin at Brooklands, piloting a Douglas outfit. In fact, as we will see, Douglas was also a pioneer in sidecar racing. Learn all about the history of sidecars racing and its competitors from the beginning in Mick Walkers latest book.