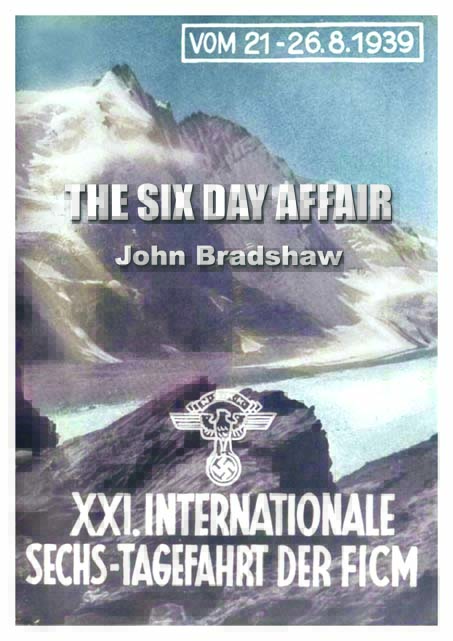 The National Motorcycle Museum will host the launch of a new book “The Six Day Affair” by John Bradshaw on Saturday 02/08/14.

Held in the Museum Foyer the author will be available to sign copies and discuss this fascinating new title which concerns the 1939 ISDT which was underway in Austria the week prior to the outbreak of WW2.

Following the 1936 Olympics in Berlin, the ISDT was seen by Hitler as being another opportunity for Nazi dominance and the 1939 ISDT was unexpectedly held in Austria, riding through the mountains surrounding Salzburg. Half way through the event, with the British teams once again doing very well indeed, they received a telegram from the British Embassy telling them to get out immediately. WWII started just a week later.

The book is the story of how the British riders – men and women, army and civilian – successfully made it away through Switzerland with the help of their friendly German escort has so far only been mentioned in magazine articles, but extensive research has revealed much new material about this fascinating and exciting event in history.

Costing £12.00 the book will be available to purchase from the Museum shop or online via www.thenmmshop.co.uk following the event on 02/08/14

To coincide with the launch of this book whose main themes are both WW2 & ISDT we are inviting owners of WD/Military or ISDT/Trials machines to ride in or bring them along to display in front of the Museum Entrance on 02/08/14. Riders displaying these machines will receive half price entry to the Museum collection.

D-Day landings we will be delighted to see as many WD machines as possible to help commemorate the brave servicemen & women who made the ultimate sacrifice for their country.

The National Motorcycle Museum Supports the “Pilgrim Bandits” charity which helps ex- service personal. The Museum will be making a donation to Pilgrim Bandits for each WD/Military machine that is displayed on the day.

Conveniently located in the heart of the Midlands Transport Network, with Birmingham  International railway station just a five-minute taxi ride away. At over 850 machines the National Motorcycle Museum is not only the largest collection of British Motorcycles in the World but also an award-winning venue with conferencing and events facilities. The conference centre has 13 purpose built suites available, including the Wardroom, seating small parties of up to 20 guests, and the Imperial Suite which can host 1000.