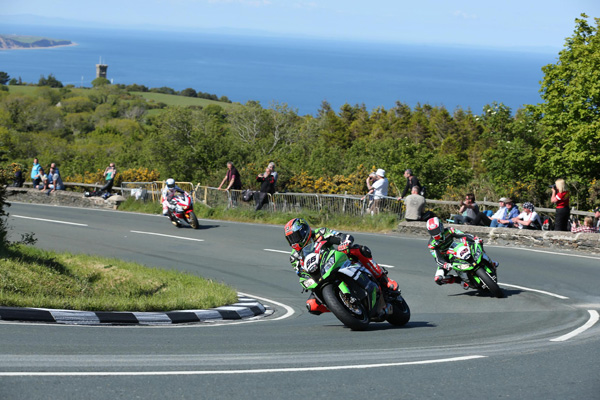 A number of high profile World Superbike riders are heading for the next round of the championship in Misano this weekend with their lap of the iconic TT Mountain Course still fresh in their memory. 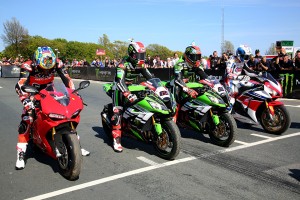 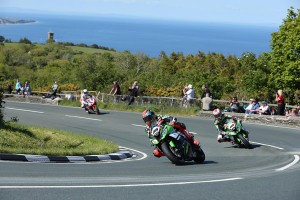 Four of the leading contenders, Chas Davies, Sylvain Guintoli, Jonathan Rea and Tom Sykes, enjoyed a parade lap around the iconic 37 mile circuit in the break between races last Wednesday as part of the 2015 Isle of Man TT Races fuelled by Monster Energy.

“What an unbelievable feeling. That felt so fast. I had to push to follow the other riders. I looked down at one point at the speedometer and it said 170 and I thought that’s not right and I even managed to outbreak myself at one point. What a track.”

Isle of Man resident Jonathan Rea and his Kawasaki Racing teammate Tom Sykes were also on the lap. Jonathan Rea is no stranger to the track and has already enjoyed a closed road lap but it was a first time experience for Tom Sykes who said: 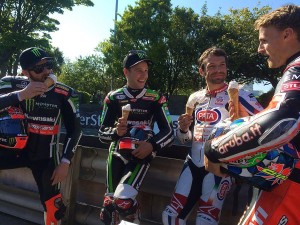 “I can see why all these riders are so in love with the place. I’ve never been round it and suddenly looked down and I’m at 170mph as I go through a village. I would have liked to go behind Milky (TT Rider liaison officer Richard Quayle) the whole way round as I felt I was riding blind when I wasn’t behind him and was really relaxed when I was. We had a fantastic reaction from the crowd and it was a great experience. I only wish I’d been able to do a few more laps.”

The Kawasaki pair will now resume their head to head at the top of the WSBK leader board in Italy. Rea has built up a lead of over a hundred points with race wins in every round but Sykes ended that run with double victory in the British round of the series at Donington Park.

“There was so much to take in over one lap. It was like nothing else I’ve done. My respect levels for the road racers were really high before this but seeing this now, feeling the bumps they’re gone through the roof. I’m currently on a safety commission for WSBK and we complain about a few bumps but it’s fair to say my perspective has definitely changed.

Museum To Restore Foggys First Bike!
The NMM @ The Goodwood Festival Of Speed