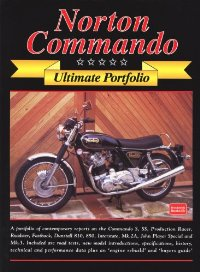 Norton Commando Ultimate
Norton Commando Ultimate Portfolio – RM Clarke
The popular Gold Portfolio on the Norton Commando is now out of print and has been replaced with this Ultimate Portfolio which has a further 36 pages with some in colour. The Commando started life with 600cc, 650cc and then 750cc vertical twin engines which meant that vibration became a problem. A takeover of the AMC Group in 1966 by Manganese Bronze Holdings resulted in a new Norton development team which overcame the problem and, as a direct result, the new Commando made its debut in 1977 and became Britains first superbike. 49 reports on the Commando S, SS, Production Racer, Roadster, Fastback, Dunstall 810, 850, Interstate, Mk.2A, John Player Special and Mk.3. Included are road tests, new model introductions, specifications, history, technical & performance data plus an engine rebuild & buyers guide.