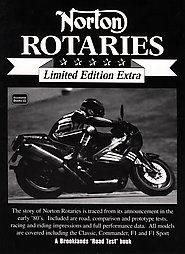 In 1983 Norton Motors (1978) Ltd commenced production of the Interpol II. This machine was air-cooled with a twin rotary engine and incorporated police equipment. 1987 saw a change of ownership and in came Philippe Le Roux who put on the market a limited production run of 100 air-cooled Classics which sold out within weeks. Later that year Norton released the water-cooled Commander to the police forces. This machine had a full fairing and integral panniers. The civilian version was launched in May 1988 and was later offered with detachable Krauser panniers. Following the success of the JPS racing team, winning the 1989 British championship and Shell Oils Supercup, Norton unveiled the F1 superbike, with a Spondon frame, White Power suspension and fully enclosed bodywork. In 1992 Steve Hislop won the Senior Isle of Man TT Race on this exceptional machine and in the same year the F1 Sport, which had open bodywork, was released to the public. Norton Rotaries are very much an enthusiasts bike with less than 1000 made in total over a ten year period, the F1 and F1 Sport being the most highly prized. Included are road, comparison & prototype tests, racing & riding impressions. All models are covered including the Classic, Commander, F1 & F1 Sport.