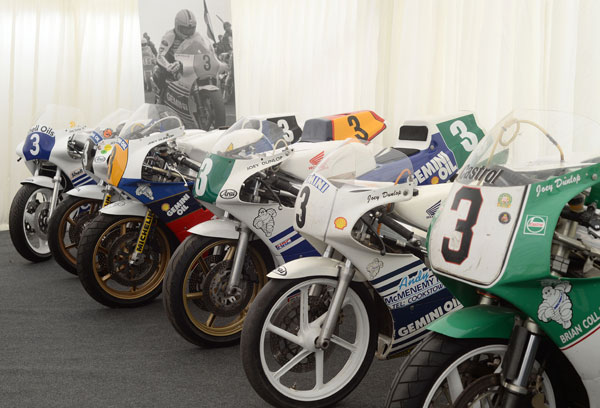 The greatest ever collection of some of the definitive race bikes of Joey Dunlop’s career will open today on the Isle of Man as part of the Classic TT Races presented by Bennetts.

The Isle of Man Government’s Department of Economic Development Motorsport Team has assembled the free paddock display of 26 bikes as part of the celebrations for the legendary Irish rider’s career. The Ballymoney man won 26 TT Races in a 24 year Mountain Course career.

This weekend also sees the paddock turning back the clock in an 80’s themed fancy dress experience on Friday 22nd August and a parade lap featuring many of Joey Dunlop’s greatest rivals on Saturday 23rd.

The bike collection, all of which have been loaned for the five-day exhibition by private collectors, spans Joey’s entire Isle of Man career and features the first bike that Joey raced at the TT – the TZ350 Yamsel Yamaha through to the last – the iconic Honda SP1.

Although Honda, the marque most closely associated with his career, dominates the collection of 26 machines, the display also features the RG500 Suzuki that he Joey rode in the 1978 TT Races, his 350 Aermacchi from his Manx Grand Prix Classic Race days, his 1980 500 Yamaha and the Yamaha Yamsel that he won his first Southern 100 on.

David Cretney, MHK, the Isle of Man Government’s Minister of Fun, who will officially open the display at 4pm today, commented:

“We themed our Classic TT weekend around the decade associated with Joey, and it is a time that he was undoubtedly at the peak of his powers, but the reality, as this bike display shows, is that the man from Ballymoney made a huge impact on the Island from the moment he stepped off the boat in 1976 and in all my time associated with the event I cannot recall more popular wins than his triple in 2000 shortly before we lost him.”

“It is entirely appropriate that we have the first and last bikes that he raced on the Island on display as well as a number in between and we are very grateful to everyone that has lent us bikes to pay appropriate tribute to someone who made such an enormous impact on the Island and worldwide.”