Menu
The National Motorcycle Museum values your support. For any queries please contact 01675 444123 or shop@thenmm.co.uk
BMS ORDERS Due to digitisation of the technical archive,BMS orders will take longer than normal to process between December 2021 and March 2022
By NMM News on August 10, 2021 in News 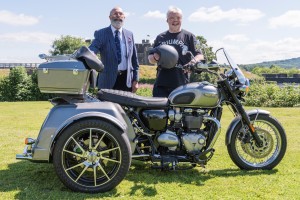 Disabled Falklands veteran Simon Weston, CBE has taken to the road on a bespoke built Triumph trike partially financed by crowdfunding. Simon was presented with the gleaming machine just days before his 60th birthday by former Triumph engineer and world speed record holder Norman Hyde, who initiated the £25K project two years ago.

Triumph Motorcycles donated a new 2020 T120 Bonneville to act as the base of the design and Hyde selected Trike Design of Caerphilly, South Wales (coincidentally Simon’s hometown) to build and create the trike conversion, with adaptive controls.

In addition to the motorcycle donation from Triumph Motorcycles, crowdfunding brought in the remainder of the build cost with generous single donations from five pounds up to four-figure sums.

Simon said: “I’m living my dream. When I was young, my late mother made me promise never to have a motorbike, but I had wanted a trike for years. I cannot thank Norman and the many people who donated for their kindness and generosity and turn my dream into reality.”

Serving with the Welsh Guards during the 1982 conflict in the South Atlantic, Simon suffered 46 per cent burns at the age of 20 when the ship he was on was bombed from the air. As a result, he lost fingers from both hands.

Norman Hyde said: “When I met Simon two years ago, he told me of his passion to ride a trike. Knowing the sacrifices and bravery Simon had shown to our country combined with the good and willing people in the British biking community, I immediately thought about trying to help make Simons dream happen.”

Along with Triumph, many other trade names backed the project including the MCIA, LS2 Helmets, Held clothing brand – who made bespoke gloves for Simon – and finally the various suppliers of parts and services to Trike Design. The Triumph Owners MCC donated a substantial sum towards the build.

Hank Hancock of Trike Design, specialists in building three-wheelers and adapting machines for disabled riders, paid tribute to his long-standing associate Robin Davies for developing the adaptions to suit Simon, who took readily to the trike after a couple of lessons.

Simon said: “I soon worked out how to ride it I didn’t want to stop! I have never ridden a two-wheeler, so I didn’t have any preconceptions.” Once fully confident, Simon hopes to entice his wife Lucy onto the pillion seat.

About the trike build

The rear end conversion is Trike Design’s latest Brooklands Sport design. With the rear wheel and other components removed, the swingarm was cut back and adapter pieces welded on to ensure a subframe could be attached safely at several points. The subframe supports the independent suspension and an anti-roll bar for the 17in alloy rear wheels.

The chain drives twin shafts via a central differential, vital for smooth cornering.  Disc brakes assembled from car components retain the relocated original ABS and a handbrake complies with regulations. The neat GRP enclosure has a boot taking two helmets and there is more carrying space in the top box. Stainless exhaust pipe extenders place the outlets behind the bodywork, with the system mapped to suit. At the front, custom-made fork yokes reduce trail by a few degrees to make the steering lighter.

Ingenious work by Trike Design’s Robin Davies adapted the controls for Simon. A right-side pedal applies the brakes via two master cylinders, with automatic front-and-rear compensation. Outboard of it, another pedal provides fly-by-wire throttle control. On the left, a pedal and linkage operate the clutch.

Kliktronic electric gear-shifting is by buttons on the handlebars, for downward changes on the left and upward on the right. A hand lever on the right of the machine used with another button activates a winch motor to provide reverse drive for parking and manoeuvring. The pulled-back bars have hand guards donated by Triumph to prevent Simon’s hands, which have poor circulation, from getting too cold.

Simon Weston had been in the Army’s Welsh Guards regiment for five years when he sustained life-changing injuries. He was aboard the Royal Fleet Auxiliary ship Sir Galahad, carrying fuel, ammunition, and incendiaries, when it was attacked by the Argentine Air Force. Forty-nine of Simon’s fellow Welsh Guards were killed in the inferno.

Undergoing 97 operations over many years, Simon has lived through some dark times, and he credits his mother Pauline with helping him become more positive and face reality of his experience.

Simon became nationally known through TV interviews and programmes such as This is Your Life and devoted his energies to several charities. Decorated with military medals, he was awarded an OBE in 1992 and made a CBE in 2016 for charitable services. Granted the Freedom of Liverpool, he has an honorary doctorate from Heriot-Watt University and is an honorary fellow of Cardiff University. Simon continues to be a strong advocate for troops’ and veterans’ rights and is an inspirational speaker on mental wellness.