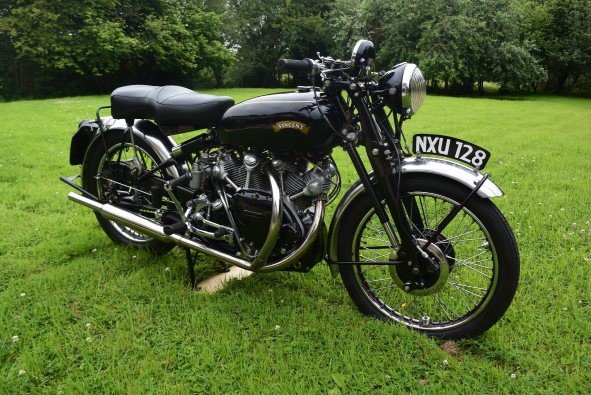 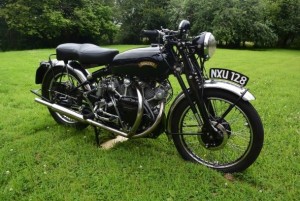 This wonderful survivor, the legendary Vincent Black Shadow, is part of a deceased estate, owned by the same family since 1980. It comes to sale with H&H Classics at the National Motorcycle Museum on October 27th.

This beautiful Black Shadow was first registered on the 18th of June 1953 and bought by the last owner, an engineer, in 1980 using it at the time for touring and holidays with friends. Its frame number matches factory records.

The bike comes fitted with a few desirable modifications including an electric starter kit, BTH mag, Alton dynamo, Stainless Steel exhaust system and a Hills centre stand. It looks to have been an on-going restoration project with a receipt dated 16.09.10 for £3600 worth of assorted work and one dated 09.09.16 for another £1900. A lot of the nuts and bolts are stainless and the wheels are fitted with stainless spokes.

As well as a current V5C there is an original Vincent parts list and a ‘Motor Cycling’ maintenance book. Now showing an unverified 50116 miles on its 5″ 150 MPH speedo there is an old MOT stating the mileage as being 50036 back in 2010 so has obviously not had much use in recent years. It has recently been started briefly just to make sure everything turns over okay but will need some recommissioning work before use.

The Vincent story began with Phil Vincent’s purchase of the HRD name in 1928, initially producing bikes using proprietary engines in his own chassis. Always the innovator by the mid-30s he had developed his own 500cc single and 1000cc twin-cylinder designs that survived until the company’s closure in 1955. The big vee twin was the fastest motorcycle in the world at the time and with some astute marketing become the bike everyone aspired to own. The Rapide and Black Shadow range have become some of the most desirable and iconic bikes of the era.