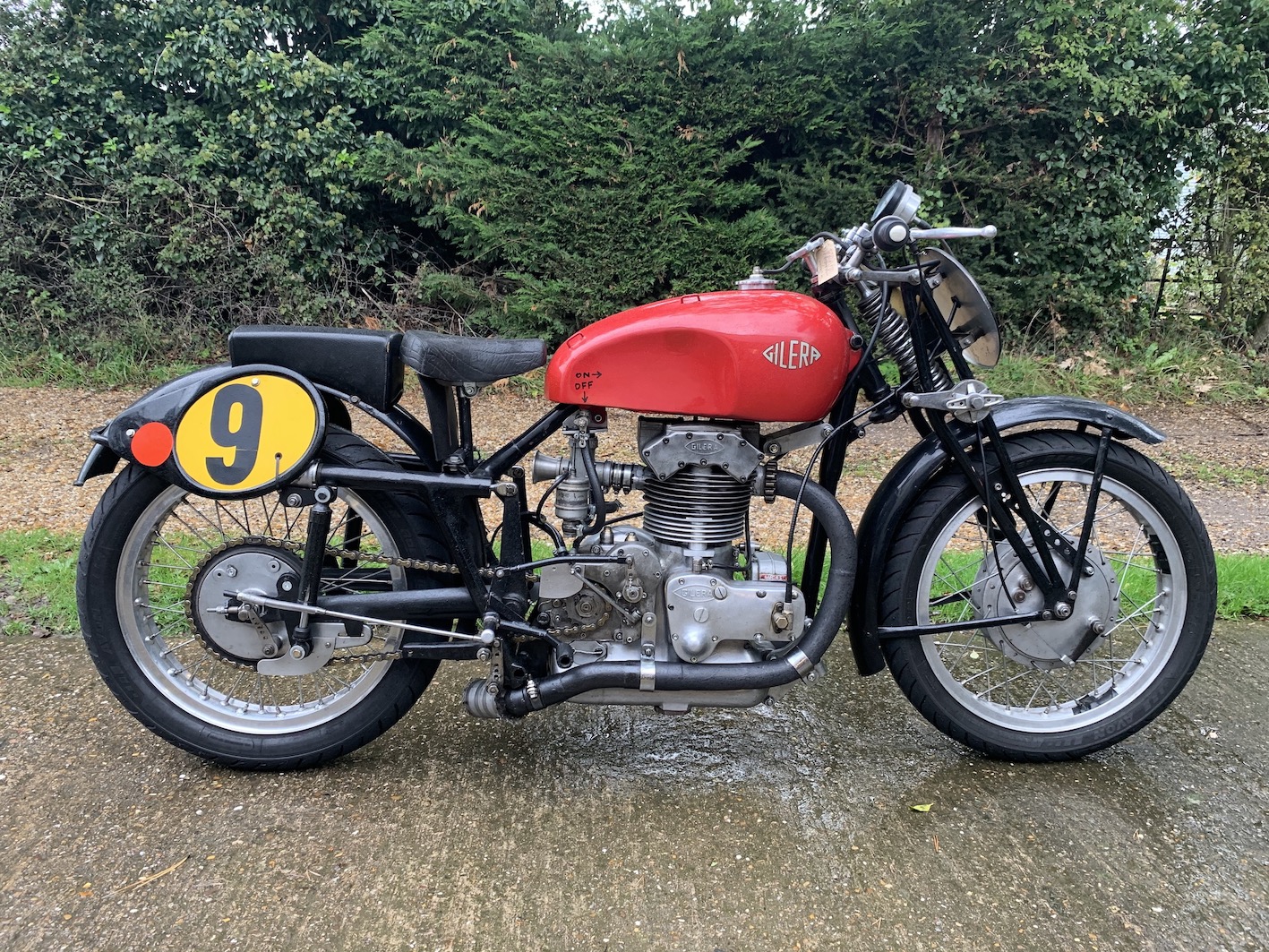 By NMM News on October 17, 2019 in News, Press Release
A copy of a 1946 Gilera Saturno Competizione 500cc Built in the 1960’s by ex works Gilera rider Ettore Villa to the EXACT spec of his 1946 factory race bike
An exactingly built copy of a much loved 1946 Gilera Saturno Competizione 500cc created with care and attention to every detail in the 1960s by Ex-works Gilera rider Ettore Villa, is now for sale with H&H Classics for an estimate of £11,000 to £13,000 at the National Motorcycle Museum on November 2nd.
Once this wonderful motorbike project was complete it was used by Villa in Italy for historic sprints and parades.
The bike was then purchased by Raymond Ainscoe (a famous collector) in 1992 for his collection. It was then purchased from Ainscoe by the current vendor Tim Jackson in 2006.
Original Gilero in action (pictured). 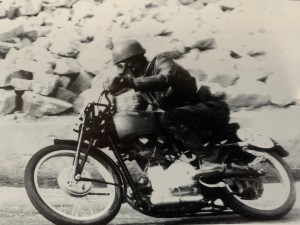 This wonderful bike was modified and uprated for competition by Tim over 2006/2007. Modifications include Lucas mag replacing the original Marelli, rear suspension, alloy barrel replacing the cast original and front brake. All original parts are included in the sale.
Tim raced the bike at the Goodwood Revival in 2010, finishing 6th and in 2014 finishing 7th. The bike also has been raced at Silverstone, Mallory and Belgium over the years.
Ettore Villa (pictured) on the bike that he built. 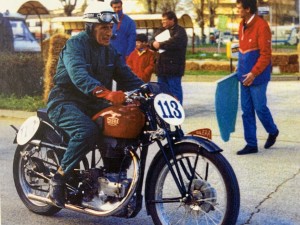 H&H Motorcycle specialist Mark Bryan says “These bikes are rare and don’t come on the open market very often, so I’m pleased our vendor chose to sell the bike at our Museum sale. “With its fabulous provenance I’m sure it will attract a lot of interest and do very well.”
Guiseppe Gilera who was born in 1887 started at the age of 15 an apprenticeship with the Bianchi motorcycle company as a mechanic, he went on to further his skill with the Italian branch of the Swiss Moto Reve company including a stage at the factory in Geneva. At the age of 22 in 1909 Guiseppe Gilera built the first motorcycle of his own design in a small shop in Milan. He won the same year a hill-climbing race with this machine. In 1911 he started a modest Gilera racing team and participated in many regional races. Starting to get recognition he met a lawyer who had chronic trouble with his Harley-Davidson; Gilera’s magic hands cured the problem. The lawyer was so impressed that he introduced Guiseppe to wealthy investors who financed a start up company manufacturing of a side valve single motorcycle followed by a twin.
The first prototype of the Saturno racing version equipped with a 32 mm. Dell’Orto carburetor was shown on 1940 and Massimo Masserini won the Targa Florio in Palermo on its first race with it. The privateers instantly recognised the potential of this machine. After the ban on superchargers in 1946, the Saturno racing version was hastily revised as a stopgap measure because the new 4-cylinder machine was not yet ready. The Saturno now featured a blade girder fork and a full width front brake; a 35-mm. carburetor was installed to boost power to 36-hp at 6000 rpm. Raced to first place in 1947 and 1948 by Carlo Bandirola in San Remo, the Sanremo name stuck to this motorcycle model. The Saturno won this race for the next three consecutive years.
Villa at the start line in Rome for the Monte Mario Hill Climb which he won (pictured). 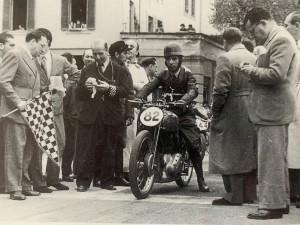