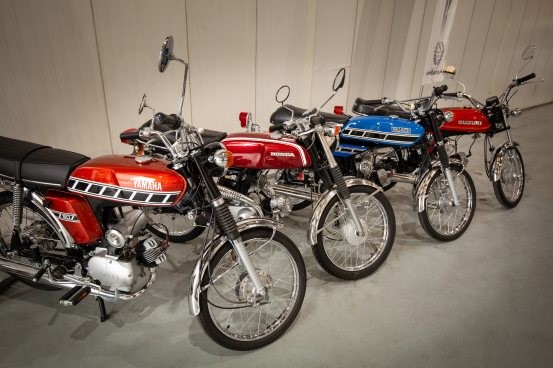 BIKING TRENDS ON VIEW AT NMM 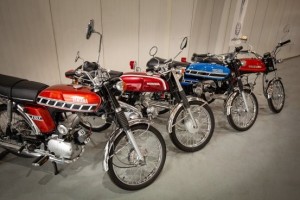 For so many of us the two collections shown here tell the story of how we got into biking says Ian Cunningham of H&H Classics.

“These four bikes are a collection of ‘Sports Mopeds’ from the seventies. In 1971 the government decided that allowing 16 year olds to ride a 250cc was a bit risky so they restricted them to mopeds, the idea being young riders would get some experience on what they imagined would be essentially a push bike with an engine.

Of course the manufacturers saw a loophole and began producing sporty little 50cc bikes that had push bike style pedals to qualify as a moped, the legal definition being ‘a 50cc two wheeler that can be propelled by pedals’. The 1970s was when most of our potential buyers started motorcycling so they would have cut their teeth on these ‘sixteener specials’.

By 1978 the Department of Transport had begun to realise that the requirement for 16 years olds to only be allowed to ride a ’50cc that can be propelled by pedals’ was being abused. Most mopeds did about 50mph but with pedals that were almost impossible to use so the law was modified to a ’50cc with a top speed of 30mph’. The A50K was supplied with a proper footrest instead of the pedals but a spacer in the carb to hold it back, soon removed once run in!

Any motorcyclist around the age of 60 will feel a great deal of nostalgia on seeing these little bikes speaking as they do of the story of our youth.” 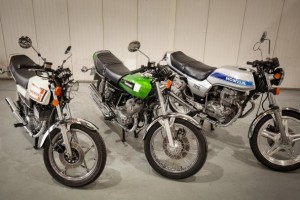 “This second collection of three bikes depicts the next stage of motorcycling for bikers in the 70/80s. After you had served your apprenticeship on a moped, at seventeen you could jump up to a ‘real’ bike with a 250cc engine,

But once again the government put a stop to this in the early 80s when they realised that the bikes now did 100mph.

From the left we have a 1981 Suzuki X7, promoted as the ‘Ton up 250’ with its claimed 100mph top speed, the bike that actually led to the introduction of new licensing laws restricting learners to 125cc a couple of years later.    In the middle there is a 1982 Kawasaki KH250, the most exotic one with its 3 cylinder engine and on the right the 1979 Honda Superdream, the sensible economical 250 with a proper big bike feel.”

All of these bikes are in the next NMM sale in October.