Velocette Le Vogue
A Kent based motorbike enthusiast managed to secrete no fewer than 21 motorbikes in his garage, garden shed and cellar, unknown to his family. The collection of bikes will be sold on July 30th with H&H Classics at the National Motorcycle Museum. 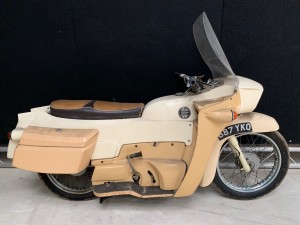 After the secret collector’s death, his family were amazed to discover the perfectly documented and hidden treasure trove. The bikes were found under a variety of covers and include, a BMW with Steib side-car, six 1950s Autocycles that the district nurse would have used around the villages, and his pride and joy – a Velocette Le Vogue motorbike.
Perfect paperwork for all 21 hidden motorcycles
The family admits that their father was a bit unusual: “Our dad was a little eccentric. An HGV driver by trade, a collector and craftsman at heart and a hoarder by nature – but an incredibly organised one!” 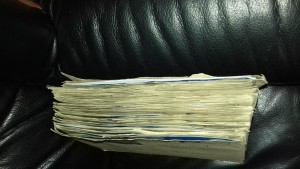 His daughter Su says: “It is very sad to see all these bikes and paraphernalia leave their hiding places and go off to be sold. Dad was a clever, honest and incredibly interesting man and you never knew what to expect. – he’s still surprising us now!”
“When dad died, and we started to sort through his paperwork, we found a file of logbooks for motorbikes. Growing up, we knew he’d had a passion for them and spent his 40’s and 50’s restoring a few and that there were a couple in the garage, wrapped under blankets but in this file we found 21 envelopes!”
“They were labelled with engine numbers, reg numbers and with V5C’s inside along with the older V5’s and each envelope contained the interesting additional paperwork for each bike; original registration documents, purchase receipt, repair receipts, petrol coupons and any scrap of paper with any relevance to the bike. We couldn’t believe there could be 21 bikes at home as we just hadn’t seen them and so the hunt began.”
BMW hidden away
In the garage, there was one obvious bike under a blanket, and they knew the combination BMW and Steib sidecar was tucked behind some hanging curtains, but as they dug a little further and pulled covers off, they found three more motorbikes snuggled under wraps. 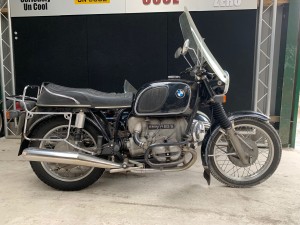 A combination and four other bikes were in a little garden shed stashed behind some other normal garden items and a couple of pushbikes. And in another shed they found six more.
So with 13 found they were beginning to scratch their heads as to where the other eight could be. They emptied the smaller shed and found that there was an extra bike stacked in behind one of the others.
Another was found under a tarp in the garden – it had been there for some 30 years and nobody in the family had taken any notice of it and hadn’t ever even questioned what it was.
In the cellar, which had some benches, small tools and pots of paint on shelves, they dragged out a workbench, and found two autocycles tucked behind it, and completely covered in wood-shavings and dust.
The last five bikes were harder to find, eventually discovered in the garage, that they’d already searched once. These missing ones were found pushed up against the walls of the garage, hidden under blankets and sheets of plywood, pieces of wood, old pipes and radiators and all sorts of other general garage detritus.
Mark Bryan of H&H Classic Bike Department says: “The restored bikes have been properly laid-up on blocks to protect their wheels/tyres, some engines/gearboxes drained, spark leads disconnected. Even the unrestored projects were all carefully wrapped up to protect them from any further degradation and preserve them in their original condition.”
A note on one of the logbook envelopes listed spare Steib sidecars – but finding these proved almost impossible. Eventually they were spotted tucked under the fire escape – almost invisible to passers-by.
The collector’s daughter says: “Once, maybe 40 years ago, Dad had a bonfire in the garden. He stayed with it until it was out and once he was sure it was safe, he went to bed. In the middle of the night he woke to noise and shouting and discovered that our wooden fire escape at the rear of the house had caught alight, with not only the Steibs under it but also at the time, his pride and joy – the Velocette Le Vogue Motorbike trapped beneath the flames. Dad fought the fire himself and dragged the burning tarps off the bike with his bare hands. He sustained burns to his hands but his beloved bike was unharmed – he was so quick that only the tarps had burnt – and incredibly there was no damage at all to the bike.”
“Dad’s hobby in his 40’s and 50’s was renovating these old motorbikes. We used to go away to motorbike rallies and he would show a couple of the renovated ones. He would ride a little autocycle and he allowed me, his daughter (from about the age of 11) to ride either the very rare Velocette Le Vogue or the massive Matchless 650 café racer around the various arenas. I even rode it around Brands Hatch. He was such a confident man, and his confidence was so infectious that it never even occurred to me that there was anything unusual about a youngster of about 7 stone riding such a huge machine. Recently, uncovering that huge machine – I was amazed that I’d ever been brave enough to ride it – it’s huge!”
“For a couple of decades – he was incredibly busy with it all, and then his hobby moved on to woodworking and he just packed them all up and they’ve been forgotten about for over 30 years. None of us – not even mum – knew he had so many. In the 1970’s and 80’s he must have just added to his collection and quietly ferreted them away. We couldn’t believe he had 21 of them. No one would ever have known they were here – we’d all been in and out of the garage so many times and yet five large bikes and four autocycles were concealed in there.”
Gordon G. May – South African Expedition
﻿Try a Classic Bike day!