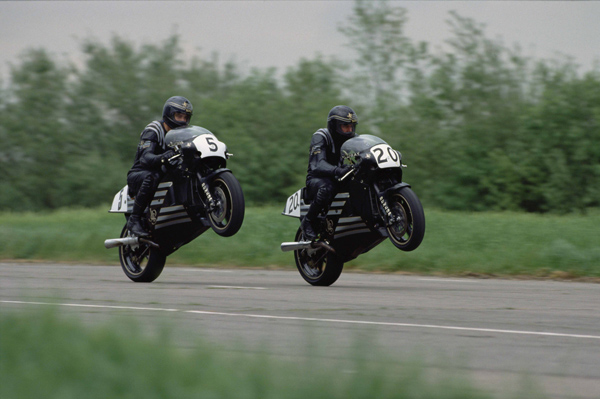 One of the biggest highlights of the 2015 Classic TT presented by Bennetts will be the ‘Norton – The Rotary Years – Parade sponsored by the Isle of Man Steam Packet Company’, featuring a number of the iconic machines which took countless wins and podiums in the British Championship, as well as at the Isle of Man and other International road races between 1987 and 1994.

Whilst the Norton Rotary has appeared in many parade laps around the Mountain Course – and, of course featured in race wins and podiums – never before have so many appeared in one time on the island.  Indeed, the Mountain Course lap will see no less than 13 of the revolutionary machines, owned by the National Motorcycle Museum, take to the 37.73 mile course.

The first incarnation of the Rotary developed by Brian Crighton, the driving force behind the machines, was the RCW and this forms more than half the parade line-up with eight of the black clad John Player Special sponsored machines lining up on the grid.  Ridden between 1988 and 1990 by riders such as Steve Spray, Ron Halsam, Robert Dunlop and Ray Stringer, the ITV trio of Steve Parrish, Steve Plater and James Whitham will ride three of the machines while Malcolm Wheeler will ride a fourth with a subsequent feature appearing in Classic Racer magazine.

Trevor Nation and Steve Cull both took International road race podiums on the JPS Norton with the former finishing second in the 1990 Senior TT.  Both will be reunited with their old mounts with the two remaining RCW machines set to be ridden by William Dunlop, representing his late father Robert, and Australian ace and current works Norton rider, Cameron Donald.

By 1990, a newer version of the 588cc machine had been developed and was badged the NRS.  Nation and Dunlop both campaigned the machine at the TT, the latter taking third in both the 1990 F1 and 1992 Senior races.  His youngest son Michael will be on board one of them in this year’s parade with Manxman Conor Cummins on the second.

The final works NRS Norton Rotary in the parade is arguably the most famous – ‘The White Charger’ that the late Steve Hislop famously rode to victory in the 1992 Senior which was voted the greatest TT race of all time.  Hislop was riding number 19 that day and 23-time TT Race winner John McGuinness will have the honour of riding the machine.

The two remaining machines are the only ones that didn’t race at the TT.  On leaving the official Norton team, engineering guru Crighton first created the Roton and then the Duckhams QXR Norton, the latter going on to dominate the British Superbike Championship in 1994.

The late Mark Farmer first rode the bike in 1992 before Jim Moodie finished second in both the Supercup and British Superbike Championship in 1993.  However, the team enjoyed their finest moments in 1994 when they expanded to a two-rider line-up in the shape of Ian Simpson and Phil Borley.  Between them, the duo took no less than 14 wins and 31 podiums on their way to finishing first and third respectively in the British Superbike Championship and they also took multiple 1-2 finishes in a host of non-Championship meetings across the UK that season.

Simpson will ride the number 25 machine that took him to the title with the other bike being ridden by Peter Hickman, whose dad Dave played a major part in the Norton Rotary’s success, working with Crighton on the machines from 1987 onwards.

The riders will leave the line in single file and in chronological order to a narration read by Manx Radio TT Anchorman Tim Glover, which will tell the story of the Norton Rotary’s remarkable history as well as the riders that rode them.

David Cretney, the Isle of Man Government’s representative for Tourism and Motorsport commented:

“This stunning assembly of machines and riders will undoubtedly be one of the highlights of the motorsport calendar on the Isle of Man this year and will be a great tribute not only to some of the greatest and most evocative machines in the TT’s history but also some of the legendary riders that raced them.. Norton has a special place in the Isle of Man’s history and I’m sure that TT fans around the world will enjoy seeing these great bikes take to the Mountain Course again.”