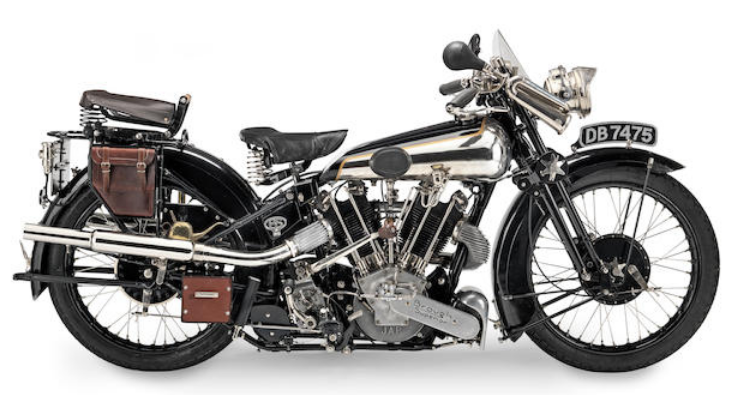 Bonhams annual Spring Stafford Sale will once again be a marathon two-day affair, held at the International Classic MotorCycle Show in Stafford on 27 and 28 April. The sale, as expected from a Bonhams auction, offers a staggering variety of machinery, hard-to-find spares and important memorabilia – more than 600 lots are presently consigned.

There is a particularly strong entry of V-Twin machines, with examples from Brough Superior, Zenith and Coventry-Eagle. The 1924 Brough Superior 980cc SS80 (£90,000-130,000) to be  offered was delivered new to Germany, and retains matching numbers, despite being nearly a century old. An early example fitted with JAP’s four-cam 980cc, it was registered in the UK after just a year in Germany and received upgrades such as an SS100 gearbox. 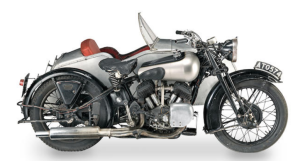 Another important Brough Superior to be offered is the 1933 Brough Superior 1,096cc 11-50hp and Cruiser Sidecar (£60,000-80,000) which starred in both Dad’s Army and George and Mildred. However, before it took to the silver screen, ‘ATO 574’ started life as a works entry for the formidable ISDT (International Six Days Trial) in 1934 where it won a coveted gold medal. It is one of only 308 built and has been in present family ownership for more than 50 years. It is offered for re-comissioning and boasts a delightful patina that only adds to this TV icon’s appeal.

Arguably the ultimate Vintage-era Brough Superior is the 1926 Brough Superior 986cc SS100 Alpine Grand Sports (£140,000-180,000). Synonymous with performance, engineering and quality of finish, this was the superbike of its day and remains so more than 90 years later. It has had several long-term owners, including a family who used it for holidays over 30 years, covering an impressive 100,000 miles up and down Britain. In 1986, it was acquired by its current owner and restored with the help of several recognised specialists across Europe. A true ‘riders-machine’, it features several modifications to improve reliability and practicality, including an anti-theft switch and an electrical generator (concealed behind gearbox). A remarkable and incredibly well-documented example of one of the most legendary Brough Superiors.

Please see the Spring Stafford sale ‘Lot Preview’ for a selection of important consignments. For more information on any of the lots, to register to bid or to arrange a complimentary valuation, please contact the motorcycle department on motorcycles@bonhams.com or call +44 20 8963 2817