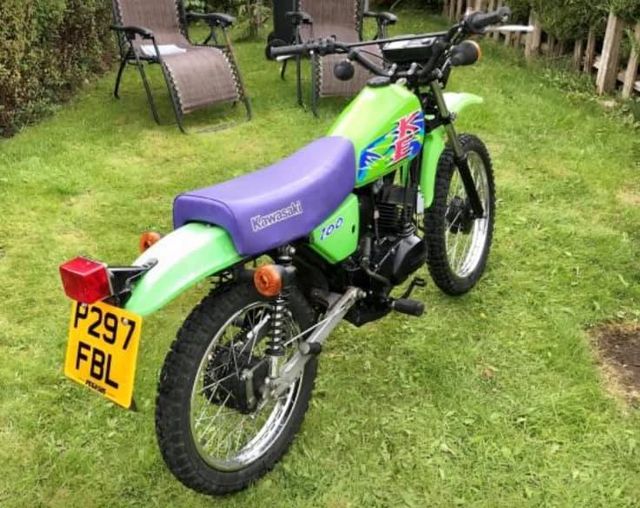 By NMM News on October 20, 2021 in News, Press Release
NICK MASON – PINK FLOYD DRUMMER’S MODEST KAWASAKI FOR SALE WITH H&H CLASSICS, ALONGSIDE TWO LEGENDARY BROUGH SUPERIORS, A VINCENT BLACK SHADOW AND TWO POST WW1
1997 KAWASAKI KE100 SUPPLIED NEW TO PINK FLOYD DRUMMER NICK MASON ESTIMATE £4,500 – £5,500
FOR SALE WITH H&H CLASSICS AT THE NATIONAL MOTORCYCLE MUSEUM, OCTOBER 27TH
This Kawasaki KE100 showing only 356 miles on the clock was bought new by renowned petrol head and legendary Pink Floyd drummer Nick Mason in late 1996, being first registered for the road in early 1997.
Ian Cunningham of H&H Classics says: “For a man famous for his collection of supercars, including a Ferrari 250GTO bought in 1977 with the proceeds from ‘Dark Side Of The Moon’ now valued at around £30M, this is probably the most modest vehicle he has ever owned!”
Also included is a signed and numbered first edition copy of Nick’s book ‘Into The Red’ about his collection of supercars. The bike is nice and original, still wearing some of its battle scars from ownership it has been recently MOTd and comes with a current V5C in the second owner’s name.
The bike comes with the original bill of sale and a copy of original V5C, plus other documentary evidence of ownership buy the fabled collector.
It comes with a welcome letter from Kawasaki UK, a copy of the V5C in Nicks name, a request for a duplicate V5, and even an application for a duplicate tax disc to replace the one destroyed when ‘accidentally left in the pocket of trousers that were put in a washing machine’.
MUSEUM LIVE SUMMER RAFFLE DRAW
Michael Rutter @ Museum LIVE