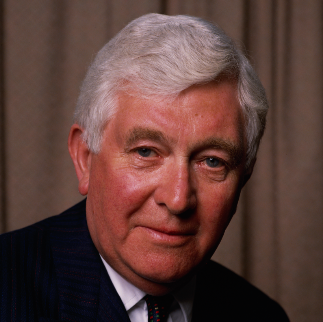 By NMM News on June 2, 2022 in News, Press Release
Affectionately known as ‘The Boss’, Mr William Roy Richards 1931 – 2008 was the founder of The National Motorcycle Museum.
Looking towards retirement after a very successful business career, some people would look to invest in a pension, but for self-made man & true patriot Roy Richards, collecting classic British motorcycles was the way forward.
Starting at Bryant’s builders in Birmingham as a quantity surveyor, Mr Richards was probably best known for his later companies the British Crane Hire Corporation and Richards & Wallington. During his time building these successful business’s during the 1960s & 70s he was also busy amassing one of the largest private collections of British motorcycles in the country.
An incredibly hard-working man, it was not unheard of for him to pad across the courtyard of his home to the museum’s head office at 4.30am in a dressing gown and work until 7.30am, get showered and dressed, before going back to the office when the staff arrived at 8.30am.
Still known as “the boss” here at the museum, he loved all motorcycles of British manufacture but most especially Norton with his favourite saying being: “when God made the mountains, he had Norton’s in mind”.
Early in 1980, Mr Richards set his heart on establishing a museum dedicated to the history, personalities and products of the British motorcycle industry, using his personal collection of machines, financial backing and most tellingly, huge enthusiasm and dogged determination to see the project succeed.
Our purpose-built museum opened in 1984, with conference and banqueting facilities added to the portfolio along with hotels in Meriden and Coventry.
Over the intervening 3 decades the National Motorcycle Museum has grown today into the largest collection of British motorcycles in the world!
As dedicated as he was to the museum and his companies, Mr Richards was a family man who was devoted to his wife & children. Mr Richards passing left a huge hole at the museum, and he is sorely missed by all who knew him. Roy Richards was a unique man, simply irreplaceable, but the museum looks to the future with a view to building on the great legacy that he left to this country.
The National Motorcycle Museum is open 7 days a week (Mon – Sun), 0830am until 5.30pm. For more info visit: https://www.nationalmotorcyclemuseum.co.uk/
UNMISSABLE SUMMER SEALEY DEALS
JUBILEE BANK HOLIDAY OPENING HOURS