By NMM News on May 4, 2022 in News, Press Release
– Collection contains some exceptional rarities such as Model 1 ‘Big four’, the favourite bike of company founder, James “Pa” Norton, and a rare speedway from 1930.
– Heritage collection spans from 1916 to 1992
– Classic motorcycles bought from single collector, Ian Loram, a Norton enthusiast
– Selected models will reside at the global headquarters in Solihull, Birmingham 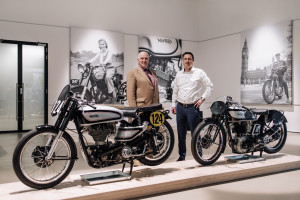 Norton Motorcycles has purchased 55 classic Norton bikes to start its heritage collection.
The collection, which spans from 1916 to 1992, boasts some of the rarest Norton bikes and sidecars ever produced including models such as Model 1 ‘Big four’, the company founder James “Pa” Norton’s favourite bike, and a rare speedway from 1930.
A 1968 Norton Atlas Police motorcycle used for Royal Family escorts, which previously rode alongside the Queen, the Queen Mother and Prince Charles is another notable bike that has been acquired.
Norton bought the bikes from single collector, Ian Loram, who has amassed the unique collection since his first classic purchase in the late 90’s.
A small selection of bikes will initially take pride of place in the reception area of the recently opened Norton HQ in Solihull, with bike fans likely to be able to get a glimpse of them in person later in the year.
“It is highly unusual for any major manufacturer to have the chance to purchase such a large, high quality, collection that represents the history of your brand, all in one go,” said Robert Hentschel, CEO of Norton Motorcycles.
“When the opportunity arose through Ian, we jumped at the chance to buy the collection and bring 55 classic motorcycles home.
“Norton has a near 125-year history that is unrivalled in the motorcycle world – and one we want to celebrate now and in the future. While it’s a hugely exciting time for us looking ahead with the recent opening of a new factory, an exciting product road map and the £100 million investment from TVS, it’s vital that we continue to celebrate the great products of our past because they will impact and steer our future.”
Ian Loram added: “I started collecting Norton Motorcycles in the late 90’s and would take every approach to not miss an opportunity to buy a rare Norton on sale. So many of the bikes hold a very special memory but it’s now a collection for the headquarters to enjoy.
“James “Pa” Norton always strived to innovate and having my facility tour during the handover of the collection, I was filled with a wonderful sense that Pa would be very proud of what is being done in his name.”
Seven rare Norton’s to get excited about:
The newly purchased line-up contains the 1921 Model 1. This was a favourite of Norton founder, James “Pa” Norton, who rode a 633cc Big Four combination 3,000 miles across Africa in 1921.
Just one of 53 built by Norton for speedway racing, the 1930 DT with a 500cc twin port and ¾ gallon fuel tank. Norton loaned several DT’s to established riders. This precise model was loaned to Oliver Langton for speedway racing.
The road-going version 1990 Norton F1 Rotary, based on the RCW588 racing motorcycle.
Adding to the collection includes the 1929 CJ350 designed by Walter Moore, which saw under 200 models produced.
Norton’s historic DNA is renowned for featherbed frames, used on numerous models by Norton for close to 20 years. The collection features British racing motorcycles, such as the 1950 Norton Manx on a featherbed frame and style modification for racing.
With only six remaining in the world, the extremely rare saddle tank racing styled 1929 JE350.
A fully restored 500cc 1938 Clubman International.
To learn more about Norton’s heritage, visit https://www.nortonmotorcycles.com/stories/article/history/

For more about the Norton Global Headquarters, visit https://www.nortonmotorcycles.com/…/new-headquarters…/
THE NMM STARS IN UPCOMING ‘SHED & BURIED’
NEXT TUESDAY’S SHED & BURIED ‘BEHIND THE SCENES’ TEASER CLIP!