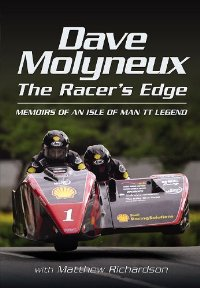 DAVE MOLYNEUX THE RACERS EDGE: Memories of an Isle of Man TT Legend by David Molyneux and Mathew Richardson

Dave Molyneux is one of the most prolific and determined sidecar racers in British history. His racing career has spanned an incredible thirty-one years. He has dominated the sidecar class at the Isle of Man TT, one of the most demanding road races in the world, with an exceptional tally of 14 wins, making him the most successful sidecar competitor in the history of the event. He has competed in British and European championships, Grand Prix and other races. This book tells, in his own words, his remarkable story. It describes his victories and defeats, the accidents and the other setbacks he has overcome, and reveals what makes him such an accomplished engineer as well as a racer.
Dave Molyneux is the most successful sidecar racer in the history of the TT with 14 wins. He holds the race record for the Sidecar TT at 58 minutes and 59.28 seconds, an average race speed of 115.132 mph over 3 laps, achieved in 2009. As well as dominating the event as a competitor, he has established an exceptional reputation as a sidecar designer and constructor – and as a sometimes outspoken commentator on the sport.