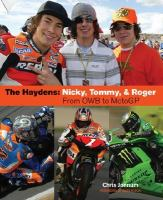 The Haydens: Nicky, Tommy, and Roger, from Owb to Motogp by Chris Jonnum

The world of top-level motorcycle road racing is so competitive that reaching it is an achievement reserved for only the very best riders. For more than one member of the same family to make it into this elite group is practically unheard of, but that didnt dissuade Tommy, Nicky, and Roger Lee Hayden. The brothers from Owensboro, Kentucky (or OWB, as they refer to it by its three-letter airport code) all ride for factory teams and have won many prestigious championships, including Nickys 2006 world title in MotoGP the Formula One of motorcycle racing. As dramatic as the brothers professional accomplishments are, theyre matched by inside stories from their early days of racing that few people know. Led by their racing parents, Earl and Rose, all the Haydens began competing at age 3 (including sisters Jennifer and Kathleen) before going on to hone their craft on the dirt tracks of the American Midwest. Crisscrossing the country in a trusty box van, the young Haydens often fudged their ages to race against older and more experienced competition. The brothers soon advanced to U.S. national road racing championships, and Nicky and went on to international glory. Written by Road Racer X Editor Chris Jonnum, and illustrated with previously unpublished family photographs and memorabilia, this is a compelling personal account of how one familys dedication, humour, and devotion to one another has made each of them successful and taken them to the peaks of motorcycle road racing.