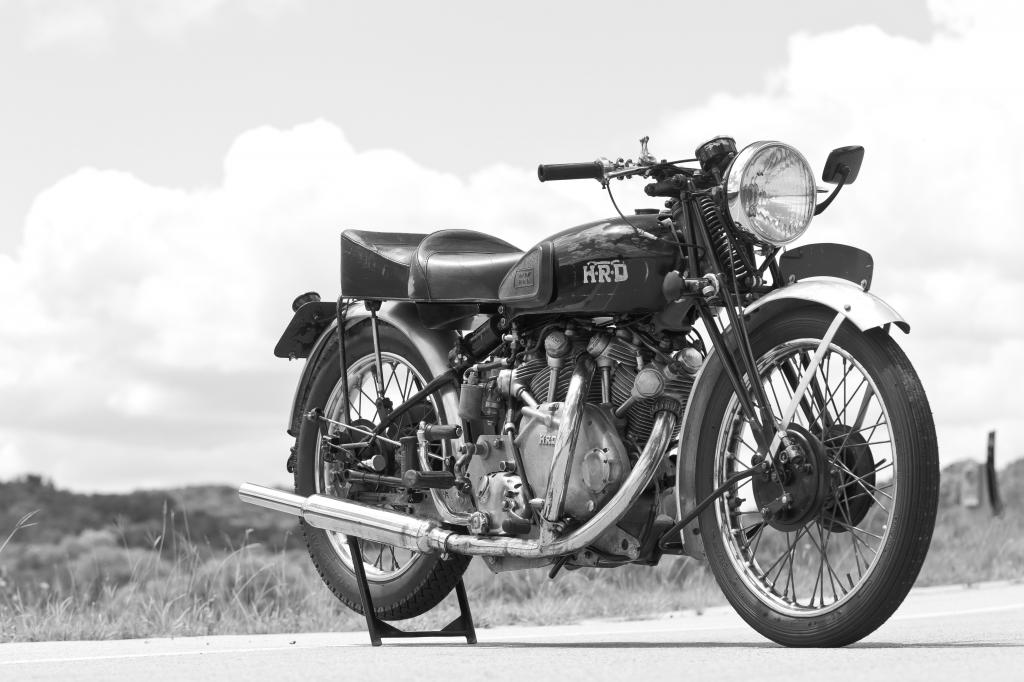 A selection of important prototype, racing and road models to be featured with a dozen cut-away engines and associated memorabilia

Following the recent news of an impressive assortment of early consignments to January’s auction – including motorcycles from the estates of Dennis Hopper and Peter Fonda, Bonhams is very pleased to announce the addition of another truly renowned collection, that of Herb Harris.

For years the Herb Harris Collection of Texas has been synonymous with the absolute finest in premium, classic British motorcycles, particularly Vincent HRD. After all, it was Harris who discovered and loving restored with painstaking historical accuracy the Rollie Free Bathing Suit Bike. Being the savior and long-time steward of one of the most famous and important motorcycles in the world was no small responsibility, yet Harris excelled in his role and applied the same meticulous approach to everything that came under his care. Soon, a Harris Vincent came to mean a motorcycle of flawless quality.

Motorcycles consigned from this famous collection include the 1946 Vincent “1X” Rapide B Prototype, the first post-War Vincent produced and the first series B Rapide ever created. Interestingly, the engine was – after numerous adoring test rides by the press – converted by the factory to power a military speedboat for the British government. The subject of a feature article in the September 2013 issue of Cycle World, 1X had been lost for nearly half a century until it was discovered, researched and reinstated back as a motorcycle once again by Harris.

Another prototype is the 1954 Vincent Black Prince Prototype, the very first created of this avant-garde model, which creator Phil Vincent called a “two-wheeled Bentley”, and the Earls Court Motor Show display bike.

Other models include an exquisitely restored 1949 Vincent Rapide C with matching Blacknell Bullet Sidecar in striking Chinese Red, a 1957 BSA B34 Works Racer, a 1962 Matchless G50 CSR Silver Eagle with a spare engine, and an early 1949 AJS 7R, among others.

Harris is also known for his extensive collection of rare cut-away, or sectioned, motors – complete motorcycle engines sliced open with precision in order to show the internal workings. These factory-made educational pieces are very scarce today and Bonhams will be offering a dozen of Harris’ from marques Ariel, BSA, Matchless, New Imperial, Norton, Sunbeam and Triumph. Perhaps even more fascinating are the two sectioned motorcycles also on offer – not just engines but complete motorcycles – a BSA Lightning and BSA Goldstar Clubman, which are surely some of the rarest of their kind. The Goldstar, for example, was created specifically for the Earls Court Motor Show, is fully operational, and is fascinating to watch as the inner mechanics and suspension move.

Being a true collector and historian, Harris also assembled an array of fascinating memorabilia, some of which will be included in the auction, such as the original bill of sale of the HRD company to Phil Vincent in 1928, or some of the first conceptual drawings Phil Vincent made in 1928.

With such an incredible line-up already confirmed, Bonhams is accepting select consignments for just a short while longer. Sellers interested in consigning rare and important motorcycles to this internationally attended auction should contact one of the following Bonhams representatives posthaste:

More details about the Las Vegas Motorcycle Auction scheduled for Thursday, January 8th at Bally’s Hotel & Casino on The Strip can be found at Bonhams.com/Vegas.

Become a Friend of the Museum & be in with a great chance to win a Matchless!
F1 star joins the crowed for a bumper Stafford