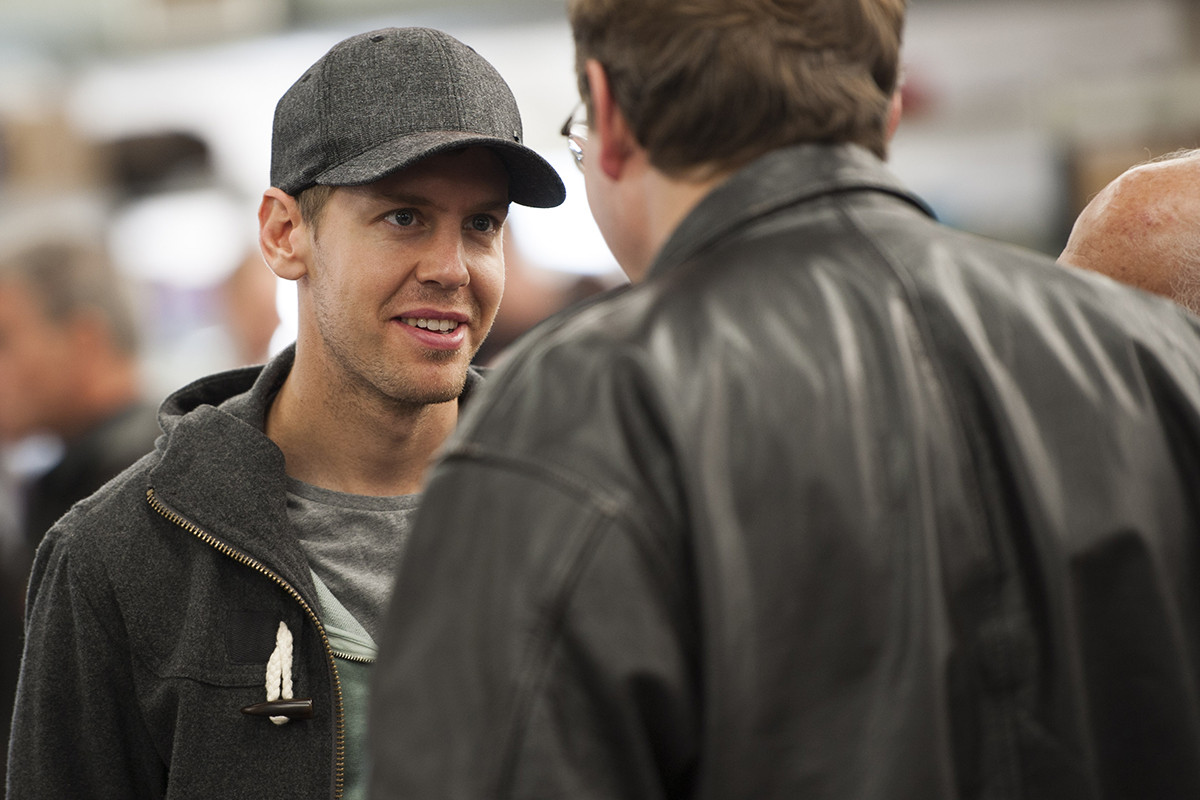 THOUSANDS of motorcycle enthusiasts left Staffordshire County Showground happy this past weekend as one of the world’s foremost classic events came to its conclusion – and among them was bike-mad four times Formula 1 world champion Sebastian Vettel.

The Red Bull Racing and soon to be Ferrari driver, well known for this love of classic motorcycles, made an unannounced stop at the Carole Nash Classic Motorcycle Mechanics Show on Sunday to bid on items in the Bonhams Autumn Stafford Sale.

Nick Mowbray, exhibition manager for the event’s organiser, said: “The classic scene is alive and well across the world and it’s superb to see it come to life once again at another successful Stafford show.

“Well-known stars such as Sebastian and David Beckham are, among others, raising the profile of classic biking in the mainstream and more and more people are getting involved.

“It’s a cool thing to be a part of right now and that has to be of great benefit to everyone involved.”

The main highlights of the October 18-19 event included special appearances from a number of motorcycle legends. Pierfrancesco Chili, the show’s star guest, was joined by four times World Superbike champion Carl Fogarty, and the two shared stories from careers that saw them battle each other both on and off the track.

Chili, known as Frankie to his legions of fans, said how much he enjoyed coming to the UK: “It was in England that I was first given the name Frankie and I put it on my leathers straight away… I loved it!

“I’ve always felt a special connection with the British fans and it’s such a fantastic experience to come to the show and meet everyone.”

The traditional auction from Bonhams provided its usual excitement with a series of stunning lots generating a total sale that topped the £1 million mark.

Graham Coxon, lead guitarist with iconic Britpop band Blur, had seven machines in the auction for sale which generated just short of £25,000. The proceeds will now be donated to the NSPCC, as announced by Coxon before the sale.

Paul Farthing, director of fundraising at the organisation said: “We are delighted with the fantastic amount that Graham has raised for us.

“The money will help us to continue our vital work helping to keep childhood safe and prevent abuse through projects and services including ChildLine.

“On behalf of all the children we work with, I would like to say a big thank you to Graham for his support.”

A number of items of Barry Sheene memorabilia also sparked excited bidding, with particular attention on racing gear worn by the man many consider to be one of the greatest competitors of all time.

The coveted Best in Show trophy was awarded to Steve Thomas for his stunning 1966 Kawasaki B8T while the Yamaha Classic Club picked up the gong for Best Club Stand.

“To win the Best in Show award at the Carole Nash Classic Motorcycle Mechanics Show is a true honour and Steve’s winning entry is certainly worthy,” added exhibition manager Nick.

“Our October event celebrates the best machines from the 1960s right through to the present day and is one of the biggest displays of machines anywhere in the world.

“To be named Best in Show among this incredible section is a reward for months, if not years, of hard-work and dedication and is richly deserved.”