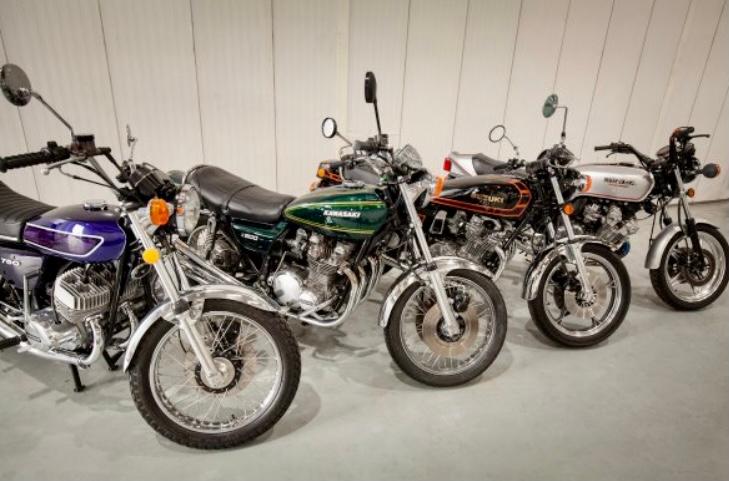 By NMM News on September 30, 2021 in News, Press Release
….SOME LEGENDARY BIKES INCLUDING A VINCENT BLACK SHADOW AND TWO BROUGH SUPERIORS
H&H Classics will be offering four bikes which tell the tale of Seventies Superbikes – one man’s collection – at the National Motorcycle Museum on October 27th. The sale also features hundreds of motorcycles including two Brough Superiors and a Vincent Black Shadow among the highlights.
The 1970s saw the dawn of the ‘Superbike’ era with some legendary bikes coming out of the big four Japanese manufacturers. Whilst Honda can take credit for creating the category with the launch of the four-cylinder CB750, it was Kawasaki who gave their bikes the power to match the Superbike tag.
The 2 stroke 3 cylinder KH750 quickly earned the nickname ‘The Widow Maker’ for its wild acceleration and 120 mph top speed all held together in decidedly lightweight frame, the purple one seen here is a very original 1975 H2C model.
The next big development from Kawasaki was the introduction of the Z1, a 900cc 4 stroke 4-cylinder bike that gave riders a top speed of 130mph again in a chassis that made the ride somewhat exciting, the green one in the photo wearing a distinctive 4 pipe exhaust is a 1976 Z900 A4 model.
The Z1 ruled the roost until Suzuki belatedly joined the 4 stroke revolution with the GS range in 1977 where they managed to bring together Japanese levels of performance and quality with European standards of handling and suspension. The GS1000 became the bike all other manufacturers had to beat, and this authentically restored black 1979 GS1000EN is a perfect example of the model.
After inventing the class in the early 1970s Honda were surprisingly quiet until the end of the decade when in typical fashion, they outdid the others with an incredible 6-cylinder 24 valve 1000cc offering with what must be one of the best looking engines ever made.

Ian Cunningham of H&H Classics Motorcycle Department comments: “If you are after a Seventies Superbike the four in this one-off collection offers you a fantastic opportunity to realise your dream.”