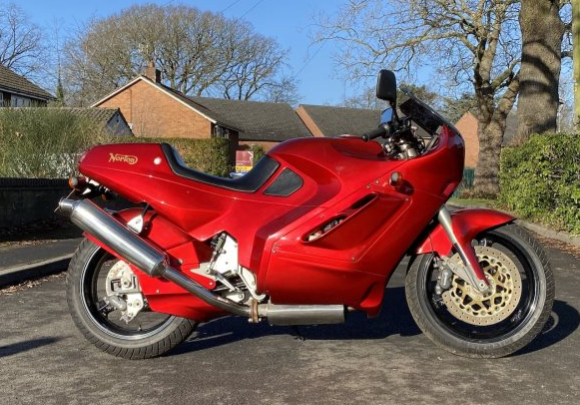 By NMM News on March 15, 2022 in News, Press Release
1991 Norton F1 Rotary Norton show bike, NEC 1991, estimate £20,000 – £24,000
The next H&H Classics motorcycle sale at the National Motorcycle Museum including some exceptionally rare and interesting bikes.
The first is this a very striking Norton F1, the only known example manufactured in red. One of three show bikes, confirmed by Andover Norton International Ltd, it shows just 346 miles from new! It is extimated to sell for £20,000 to £24,000.
Ordered by a Mr. Ollis (copy on file) direct from Norton, but due to problems with orders and constant delays, Mr. Ollis was provided with a Red example and was informed by Norton this was the show model and asked if this be acceptable
The machine was then registered on the 1st of January 1991. It is understood Mr. Ollis laid it up until his death in March 2004, it was then sold to Mr. Campbell. The current owner was a good friend of Mr Campbell and persuaded him to sell it to him two months later. It was placed on the road for only a few months. It comes with its current V5C, and various paperwork including brochures.
Mike Davis who heads the motorcycle salkes at H&H says: “This Norton is certainly one for the collector!”
1924 Scott Sociable one of just six known survivors, estimate £18,000 – £22,000
Another remarkable item in the sale is this 1924 Scott Sociable sidecar which was part of a very limited production run with just around 200 units made, It is today one of six known examples left. This Scott Sociable has been restored for around 20 plus years and was running once more last summer and used on vintage events. It comes complete with its current V5C and various paperwork relating to the mark.
During World War I Alfred Angas Scott had made sidecar machine gun carriers. From these he developed a three-wheel car with two wheels in line and a third one set alongside but slightly behind the other rear wheel, all supported by a triangulated tubular steel frame. Although the layout still resembled that of a motorcycle and sidecar combination, it had wheel steering by rack and pinion. Its power was supplied by the Scott Company’s own water-cooled 578 cc twin-cylinder two-stroke engine with drive transmitted through a three-speed gearbox to the offside rear wheel by a shaft. There was no reverse gear. Turning was dangerous at speed.
The vehicle was intended for military use, but orders failed to come in, so he converted it to civilian use and announced it in 1916 as the Sociable, but production had to wait until 1921. About 200 were made before production stopped in 1924. Complete versions cost £273 in 1921 falling to £135 by 1924.
1966 Velocette Thruxton, matching numbers in original trim, estimate £16,000 – £20,000
This lovely example of the Vel;ocette Thruxton has only had two previous owners from new, listed in the documentation.
Its numbers are verified by Velocette Club and is one of only 1108 Thruxtons made. It has correct Amal GP Carb, Lucas competition mag and rear set footrests and comes fitted with alloy rims TT100 tyres and twin leading shoe front brake. It is supplied with a current V5 and many receipts from famous Velocette names.
Velocette is the brand name of motorcycles made by Veloce Ltd in Hall Green, Birmingham between 1904 and 1971. One of several motorcycle manufacturers in Birmingham, Velocette was a family owned firm selling almost as many hand-built motorcycles during its lifetime as the mass-produced machines from the likes of Triumph and Norton. Veloce, while small, was a great technical innovator and many of its patented designs were commonplace on motorcycles today, including the positive-stop foot shift and swinging arm rear suspension with hydraulic dampers. Renowned for the quality of its products, the company was “always in the picture” in international motorcycle racing from the mid 1920s through to the 1950s, culminating in two 350cc World Championship titles and its legendary, and still-unbeaten, record of averaging over 100mph for 24 hours on a 500cc single cylinder machine. This was achieved on a Venom in 1961 cementing its reputation as one of the best sports bikes of its day. The Thruxton, revealed at the 1964 Earls Court Show was the final development of Velocette’s pushrod single celebrating their success in the 500 mile endurance race and although sold in a road-going version, it was really targeted at the racing fraternity. There is thought to have been only 1108 Thruxtons produced up to the companies closure in 1971.
It was sold new to a Mr Ranken on the 20th September 1966 and first changing hands 17 years later, being sold to a Mr MacDonald in May 1983 who owned it for the next 34 years. The last tax disc was issued in 1989, eventually being bought by the vendor in 2017. Part of a private collection it comes supplied with a V5C still in the second owners name and numerous receipts from famous names in the Velo world such as Geoff Dodkin, Ray Petty, R F Seymour and Swallows. The bike has been in storage for a few years so will need some recommissioning before use.
DAVID BECKHAM’S ENGLAND SCOOTER FROM ‘ROAD TO LISBON’ 2004 ADIDAS CAMPAIGN NOW FOR SALE WITH H&H CLASSICS £9,000 TO £10,000 AT THE NMM, APR 6TH
Museum Promotional Video!