By NMM News on May 24, 2019 in News, Press Release
FAMOUS ‘HOMEMADE’ BIKE FROM LIVERPOOL THAT GAVE THE BIG NAMES A RUN FOR THEIR MONEY…
On the market for the first time in a long while is the famous 1935 “Harrison” OK Supreme TT bike, for sale with H&H Classics on July 30 at the National Motorcycle Museum, for an estimate of £6,000 – £8,000.
This 1935 OK Supreme RC37 250cc was much modified by the owner Henry Harrison from Liverpool after WW2 with rear swinging arm along with AMC suspension units and then entered into the 1951 Isle of Man TT by local Liverpool bike dealer Victor Horsman. Henry Harrison riding the bike, finished 14th in the lightweight class averaging 60mph.
Henry Harrison in the TT pits for the bike’s glory days (Pictured B). 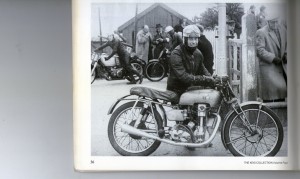 In 1952 he was entered again, this time finishing 22nd with an average speed of 66mph. These two results were quite a feat considering the bike was over 17 years old at the time!
Subsequently modified after the TT races with Velocette front suspension it was then raced successfully up to 1958 on short circuits including the Ulster GP.
The bike was bought from Henry Harrison by the current vendor in 1959 and lay unused for some years. It was then restored to its current state in the 1980s and displayed at various local Liverpool bike shows up until the 1990s.
Mark Bryan of H&H Classics, says: “We deal with all sorts of bikes on a day to day basis, but every now and again you come across something that catches your eye! Hidden away with a small collection of bikes in Liverpool we discovered this machine with its fabulous history. Altough it is unlikely to break any world records it is a very cool bike to own with its TT provenance.”
Pictured below, with a new suspension the bike was seen racing years later after its TT outings. 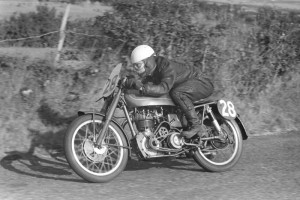