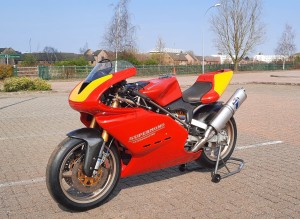 Mike Davis of H&H Classics Bike Department, says: “Not only is the Ducati Supermono one of the best looking motorcycles ever produced, it is the best packaged bike to compete in the single cylinder racing class in the last 25 years. The package includes top grade racing Ohlins front forks and rear shock, Brembo billet racing front brake calipers, Marchesini magnesium cast wheels, a 6 speed close ratio gearbox and dry racing clutch.”
This Ducati Supermono replica/ continuation bike was built by Alistair Wager, a recognised world expert on the construction of Supermonos. He has worked on over 20 of the 67 bikes produced, including bikes for riders Alan Cathcart, Robert Holden and John Barton.
This bike is made from new old stock, sourced from around the world over a long period of time, with over 1300 parts required to build this machine. He believes this is the last accurate continuation/replica Supermono able to be made.
The Ducati Supermono was introduced at the 1992 Cologne Motorcycle Show to worldwide acclaim. It was the collaboration of Ing. Massimo Bordi, for the engine design, Claudio Domenicalli (now CEO of Ducati) for the chassis design and Pierre Terblanche for the styling (999, MHE, Sport Classic, Multistrada and Hypemotard designer).
It was created to enter the growing class of the Sound of Singles (SOS) motorcycle racing class. Ultimately, the Supermono class was included in the World Superbike rounds from 1994. to 1997.
The production run was 40 machines in 1993 (100 x 70 bore and stroke = 549cc) and a further 27 made in 1995 (102 x 70 bore and stroke = 572cc), making a total of 67.
The Ducati Supermono was runner-up in 1994 and 1996 in the hands of Journalist/ Racer Alan Cathcart, who also went on to win the British Singles Championship in 1997.
The Ducati Supermono has a unique way of coping with the vibration of the inherent imbalance of a single cylinder engine. It does this by utilising two conrods as per a twin – one conrod is connected to the horizontal cylinder piston and the other conrod is connected to a reciprocating balance arm in the position of where the vertical cylinder would be and the other end of the balancer arm pivoting vertically just above the crankshaft.This makes the single think it’s a twin and allows it to rev to 11,000 rpm without any vibration. (A 90 degree L twin is perfect in primary and secondary balance and so is vibration-free.)
1953 Vincent Black Shadow owned and ridden by vendor for the last 25 years – Estimate £35,000 – £45,000 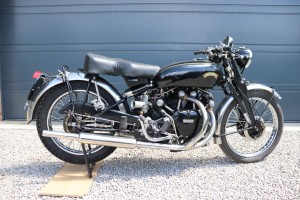 This lovely bike is part of a small private collection, restored to use on vintage runs and rallies, showing a good degree of originality including recently refurbished 5″ speedo.Supplied with a large amount of paperwork d etailing the history of the bike Will probably need a light recommissioning before use.
The Vincent story began with Phil Vincent’s purchase of the HRD name in 1928, initially producing bikes using proprietary engines in his own chassis. Always the innovator by the mid-30s he had developed his own 500cc single and 1000cc twin-cylinder designs that survived until the company’s closure in 1955. The big vee twin was the fastest motorcycle in the world at the time and with some astute marketing become the bike everyone aspired to own. The Rapide and Black Shadow range have become some of the most desirable and iconic bikes of the era.
This Shadow has been in the possession of the Vendor since May 1997 and after buying the bike it was discovered that it had a non-matching rear frame number, at some time in the late sixties a previous owner and his wife both owned Vincents, this one and a Comet. It appears that in various engine swaps the swinging arms ended up being transposed but in June 2004, following the greatly appreciated help of the Vincent Owners Club, the vendor was put in touch with a club member who had the original Shadow rear frame.
He was quite happy to re-unite the parts with the correct bike and correspondence detailing the exchange is included as well as the two continuation buff log books tracking the various changes. Following the reuniting of the rear frame with the engine the VOC issued a Certificate of Authenticity for the Shadow and the original registration number was also reassigned to the bike, all correspondence with DVLA is included. Recently the electrical system was upgraded to 12v with coil ignition for much easier starting, with the original parts retained for retro fitting if so desired.
1947 Vincent Rapide Series, a very early production Series B Estimate £30,000 – £34,000 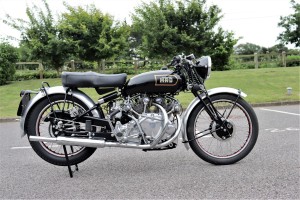 This Series B Rapide was sold new by Williams, of Cheltenham, in July 1947 and we are advised that Vincent Owners Club records confirm that the frame and engine numbers match.
GDG 399′ is one of the documented exceptions to the ‘1900 difference’ rule of thumb. Rapide engine numbers for 1946, the first year of Series B production, from 20 – 400, making this machine with engine number ’91’ a very early Series B Rapide.
The machine left the Stevenage factory on 20th May 1947 and was unknown to the Vincent Owners Club since 1950. Purchased by the current owner in 2004 it has been restored to an extremely high standard
It comes complete with its continuation RF60, V5C, a Test Certificate from 1967, and some invoices for parts. Due to storage, light recommissioning would be advised before use.
1935 Morgan Super Sport (three wheeler) estimate £25,000 – £30,000 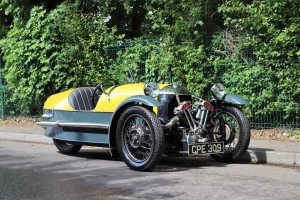 This charming 1935 Morgan Super Sports has the desirable ‘Beetleback’ body-style, and has been in the ownership of just two families since the 1970s.
It has been comprehensively restored over a ten year period with a period correct replacement Matchless V-Twin water-cooled engine. It is being sold with an accompanying dating letter from The Morgan Three-Wheeler Club.
By 1933 Morgan’s three-wheeler chassis could be ordered with four types of body, namely: Super Sports, Sports Two-Seater, Sports Family and Family. The Super Sports was notable for its chromium-plated exhaust pipes that run the length of the body. Interest in Morgans of this period has never waned and, if anything, increased in recent times – the company’s inspired decision to create a modern three-wheeler having brought the early cars to the attention of a new audience. Moreover, anybody who has seen them raced in anger – frequently beating infinitely more powerful four-wheeled Morgans and other marques – is likely to have acquired a firm admiration for the model.
According to the accompanying dating letter from the Morgan Three-Wheeler Club, chassis number D1383 was despatched new to the supplying agent, H. Beart & Co. of Surrey on the 27th of February 1935. Unfortunately, little is known of the Super Sports’ early history until it was purchased by the previous family owners in the 1970s. Used by them until being placed into storage, ‘CPE 309’ is understood to have remained off the road for some fifteen years before being purchased by the vendor in c.1997 as a full restoration project, equating to the Morgan having been in the possession of just two families for the past c.50 years.
A second 1953 Vincent Black Shadow beautifully restored – estimate £50,000 – £55,000 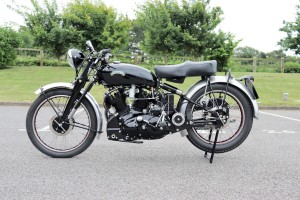 This beautifully presented Black shadow has been fully restored following its purchase by the current owner 12 years ago in large lumps. It was a complete restoration that took two years to complete with no expense spared on the quality of the work and parts.
This all correct numbers machine as verified by the VOC and complete with a current V5C Original RF60 logbook. It has been on display and has not been used for a few years. Light recommissioning will be required before use.
Ever since the Series A’s arrival in 1937, the Vincent V-Twin has been synonymous with design innovation, engineering excellence and superlative high performance. From Rollie Free’s capture of the ‘world’s fastest production motorcycle’ record in 1948 on a tuned Series-B Black Shadow to the final, fully enclosed Black Knight and Black Prince, Philip Vincent’s stress on appearance and performance is legendary. His machines bristled with innovative features, offering adjustment of brake pedal, footrests, seat height and gear-change lever. The finish was to a very high standard commensurate with the cost of the machine, which was virtually double that of any of its contemporaries. But above all else it was the V-Twin’s stupendous performance that captivated motorcyclists, whether they could afford one or not.
The appeal of the Vincent, and the Black Shadow in particular, lay in its ability to out-perform just about every other vehicle on the road, and in the early post-war years there was nothing to compare with it. This was a time when the average family sedan was barely capable of reaching 70mph, and not until the advent of Jaguar’s XK120 was there a production sports car that could live with the thundering V-Twins from Stevenage.
The Black Shadow was indeed a legend in its own lifetime, and in the 60-plus years since production ceased, the esteem in which this iconic motorcycle is held has only increased, fuelling the demand among discerning collectors for original examples of the marque, such as that offered here.
GOODWOOD FESTIVAL OF SPEED
Norton Big 4 To Auction