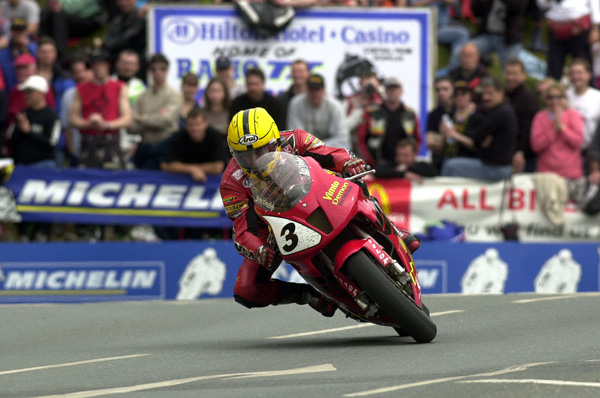 Some of the greatest names in The Isle of Man TT Races history will feature in a new exhibition, organised by Manx National Heritage, at the House of Manannan in Peel in the West of the Isle of Man.

Central to the exhibition is a retrospective look at the contribution of the Dunlop family; from ‘Joey’, who recorded 26 TT race victories in a 25 year career of racing on the Mountain Course, and his brother Robert, himself a five time race winner, in the ’70s, ’80s and ’90s, through to the modern legend Michael, who now has 11 TT Race wins.

Two of Joey’s bikes and his iconic 1988 yellow Arai helmet will be on display together with memorabilia highlighting the successful careers of the other Dunlop family members.

Other riders featured include 1980s luminaries Norman Brown and Brian Reid; Brown famously finished on the podium in every race he completed on the Isle of Man including race wins in the ’81 MGP Newcomers race and the Senior TT in 1982, his debut TT year. Reid’s notable TT career included five race victories spanning the ’80s and ’90s.

Phillip McCallen’s historic four wins in a week in 1996 are covered in the exhibition, with McCallen’s total of 11 TT race wins placing him fifth on the all-time list of TT race winners alongside Michael Dunlop, but it is his distressed leathers from the following year’s TT, when he crashed at Quarry Bends in the Lightweight TT race, that are expected to generate particular interest.

The exhibition includes narrative and display boards from Northern Ireland’s Ballymoney Museum which have been complemented by memorabilia provided by riders, teams, manufactures and motorcycling brands associated with the event.

Manx National Heritage has also utilised items from its own archive including personal telegrams and letters from the papers of David Wood, Joey’s manager for many years, which are expected to provide further insight into the TT career and history of Northern Ireland’s greatest rider.

The free to enter exhibition will run from Saturday 28th March to Sunday 6th September 2015, coinciding with this year’s TT Races, Southern 100 and Festival of Motorcycling. It will be open every day between 10am and 5pm.

Suzanne Walker, the curator of the exhibition and site manager of the House of Manannan commented:

“Some of the Northern Ireland’s best riders are inextricably linked to some of the greatest TT races and indeed the event’s history and we wanted to celebrate and acknowledge the country’s contribution through the achievements of individual riders.”

“It has been great working with Ballymoney Museum to bring this popular exhibition over to the Island. The exhibition has been timed to run during the Isle of Man’s road racing season so that the visiting race fans, as well as residents are able to see it. I hope that some of the TT riders past and present will also get the chance to experience it.”