Four decades have passed since the first show in 1980, when one man gambled everything on the idea of a show dedicated to classic bikes. The man behind that idea was Alan Whitehead, a young British bike enthusiast from Bolton.

Sitting on the homeward train after visiting the Earls Court Show in 1979, Alan reflected that one of the biggest crowds had gathered around the Vintage Motor Cycle Club stand.

Alan recalls: “I felt that there must have been plenty of like-minded enthusiasts who would welcome a show devoted to classic bikes.”

Shortly after, he gave up his job as northern advertising rep on Commercial Motor magazine and booked a weekend in October 1980 at the Manchester Belle Vue exhibition centre to carry out his plan.

Not a complete stranger to organising events, Whitehead and his wife Hilary had been running small autojumbles and antique fairs in their spare time for several years.

“Looking back, it was a very impulsive thing to do at 35 years old with a mortgage and two young children. But Hilary and I had this blind faith it would work,” he said. 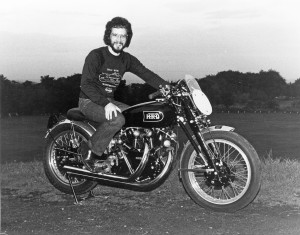 Thankfully, the gamble paid off. The naive newcomers to big-time shows hadn’t realised they should have formed a limited company and could have lost their house if the venture had been a financial flop. Although the show was very well received by those who came on the first day, there weren’t sufficient numbers of them. If the same amount went through the turnstiles on the Sunday, they wouldn’t have made enough to cover their costs.

They decided to go the next day and enjoy themselves regardless. “It was our show, we’d paid for it, it was full of the kind of people we wanted to see and the bikes we wanted to look at.”

Fortunately, enthusiasts turned up in their thousands, the show was a great success and the Whiteheads went home happy, if not exactly millionaires.

Forty years on, Alan Whitehead is still an integral part of the show’s success and will attend in April, dressed in his signature all whites and with a clipboard in hand. Having been restoring, riding and collecting British bikes since the Fifties, he’s become a celebrity in his own right in the classic motorcycling scene.

After running the shows for 20 years, a new millennium made way for new show owners Mortons Media Group to take hold of the reins. The past 20 years have seen a phenomenal amount of change happen at the show, which has gone from strength to strength but still remained as a core classic motorcycle enthusiast event.

This year’s event will see the show sharing its 40th anniversary with a 1940s theme – in a celebratory nod to the 75th anniversary of VE Day just a few weeks later.

Highlights for the weekend include a 1940s-themed hall, with a Spitfire and Hurricane taking centre stage, surrounded by an abundance of privately owned classic motorcycles and incredible club displays. The Battle of Britain Memorial Flight is due to confirm in March whether a flypast from the Lancaster, Spitfire, Hurricane and Dakota will take place.

Further plans include a facelift for the popular Classic Racer GP Paddock, transforming it into a bigger and better Firing-up Area, with all manner of different machines and engines starting up in front of the crowds, including a Rolls-Royce Merlin engine and an Armstrong Siddeley Cheetah engine from not-for-profit group, Historic Aero Engines.

The show will still be sticking to its roots as a classic bike show, with thousands of classic motorcycles to see, a huge indoor and outdoor autojumble and more than 900 traders in attendance. The Bonhams auction will be as spectacular as ever, with exciting news on the lots on offer coming soon.