WE ARE DELIGHTED TO OFFER A PAIR OF STANDARD ADULT TICKETS TO 2 LUCKY WINNERS FOR THE CAROLE NASH MCN LONDON MOTORCYCLE SHOW AT THE EXCEL ARENA 14TH – 16TH FEB 2020. 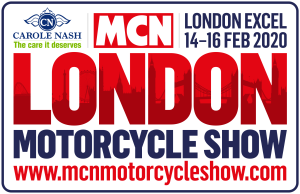 Alongside the latest machines from the world’s leading manufacturers, visitors will be able to see explosive live action racing, rare classic machines, biking celebs and a UK-exclusive celebration of iconic racer Barry Sheene. Discounted tickets for the action-packed weekend, including VIP Paddock Passes, are on sale now.

It is not just new machines on display though, as the 2020 Carole Nash MCN London Motorcycle Show will be celebrating Britain’s most famous motorcycle racer, Barry Sheene. In a UK exclusive, nine of his legendary race machines (including his two title winning bikes) are being flown in from Australia where they will be showcased and Sheene’s teammate Steve Parrish and Suzuki chief technician during Sheene’s winning years will be onstage sharing incredible insight and anecdotes. 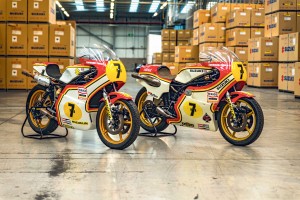 Race fans will be kept enthralled with a completely revamped Michelin Thunderdrome live action event once again taking over the centre of the show. The free races will see the world’s fastest road racer, Peter Hickman, going head-to-head with fellow Isle of Man TT competitors John McGuiness, Michael Rutter and James Hillier. Guests can upgrade their visit by purchasing a VIP paddock pass, which alongside giving entry to the whole show also allows them access to the racing stars and an unbeatable view of the action.

Alongside that, the Classic TT will officially be launched at the 2020 Carole Nash MCN London Motorcycle Show, whilst in between races John McGuinness will be found propping up the bar at his own pub! The 23 time Isle of Man TT winner will be pulling pints and sharing tales from his incredible career with punters throughout the weekend. 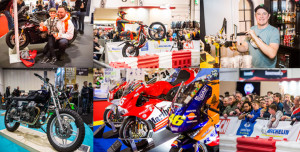 Exclusive to this year’s show are Guy Martin and James Bond Scramblers.
Triumph will be bringing along two very special 1200 Scramblers to the show. As seen by millions on the recent C4 TV show, Guy Martin’s modified Scrambler is the machine he used to successfully complete his spectacular recreation of the famous Bud Ekins jump from the movie The Great Escape.
John Leyton, one of the original cast from The Great Escape will be on the Triumph stand on Friday.

The other movie themed bike is the 1200 Scrambler used by Daniel Craig in the forthcoming big budget Bond epic No Time To Die where the hero is chased around Italian town of Matera.

Both Guy Martin and Bond Scramblers are exclusive to the 2020 London show so don’t miss your chance to see them.

Following recent news that a staggering 41% of all British riders are wearing helmets that are over five years old and now well beyond the manufacturer’s service life, MCN has launched a UK Helmet Amnesty. Everyone who brings their old helmet to the London show will receive a free gift and the opportunity to purchase a new helmet at a bargain price. Visitors wanting to take part should sign up beforehand at helmetamnesty.com.

Elsewhere, motorcyclists looking to escape on an adventure will find plenty of inspiration in the Adventure Zone and Bonhams will be bringing rare and exotic machines from the legendary Giancarlo Morbidelli collection.

Not only that, the National Motorcycle Museum will be breaking open the archives and bringing a host of exotic machines to the show (Stand CL86).

Tickets for the three-day extravaganza are on sale now at a special early bird price of £18 per person when purchased online in advance. Children 15 and under go for free and the show offers free parking for those visitors arriving by bike. More show information can be found at www.mcnmotorcycleshow.com

BMS MANUAL OF THE MONTH
Interview with John Cooper