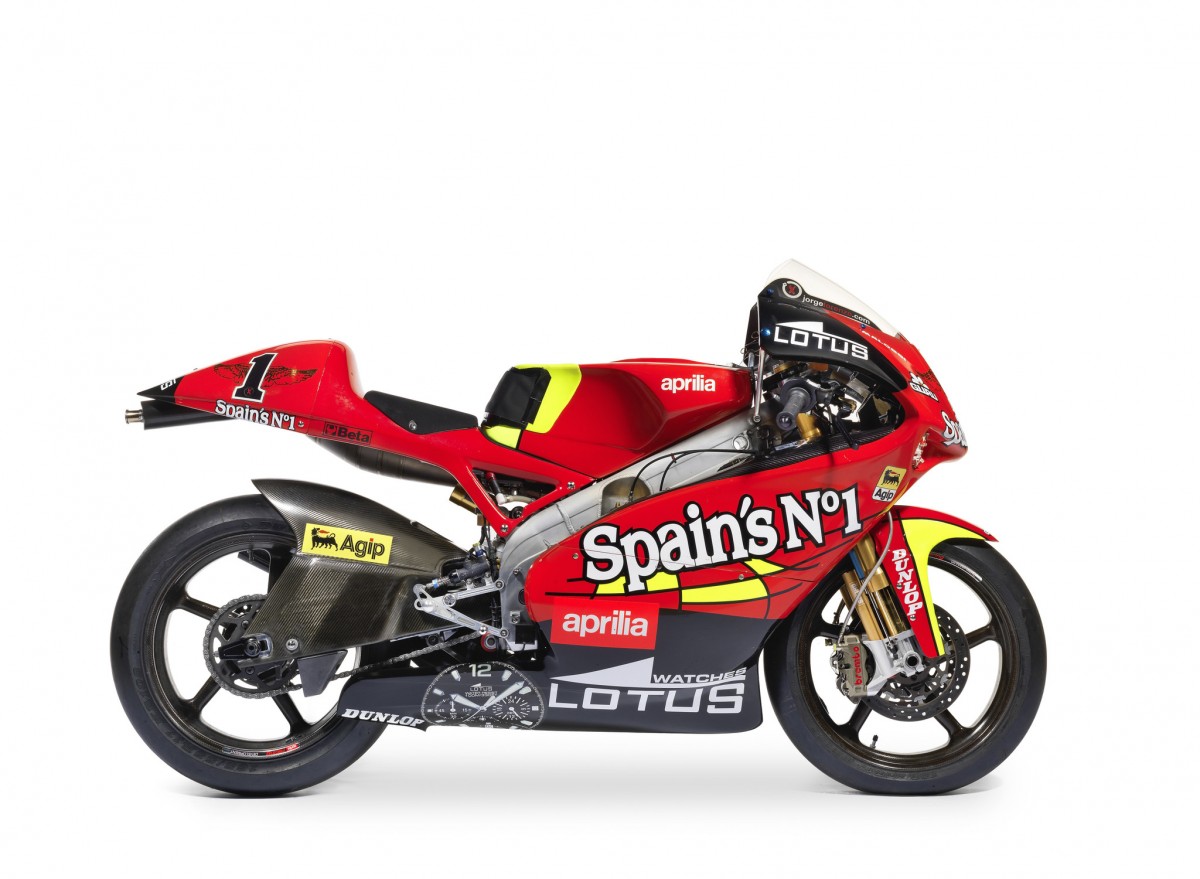 Bonhams Motorcycle Department will echo the successes of its Spring Stafford Sale and once again offer a World Championship-winning machine, this time at its Autumn Stafford Sale on 15 October.

The ex-works 2007 Aprilia 250cc Grand Prix Racing Motorcycle was ridden to its world championship win by none other than Jorge Lorenzo, the Mallorcan motorcycle racing prodigy who made his Grand Prix debut on his 15th birthday. With sixty-five wins, he is currently the fifth most decorated Grand Prix rider in motorcycling history, and his career is far from over.

In 2005, Lorenzo stepped up to a ride for the Fortuna-sponsored team, and ended an impressive fourth overall after securing four pole positions. He remained with Fortuna until the end of the 2007 season, by which time the Spanish team had gained full factory support from Aprilia who supplied the machine offered by Bonhams here. The tightly tuned bike gave Lorenzo the edge he needed, and he romped home to his second World Championship, with an astonishing 9 wins from 17 starts.

The legions of Grand Prix racing fans were devastated only a few years later when the 250 category was axed and replaced by the production-based Moto2. This decision has made these powerful, last-of-the-line thoroughbreds all the more desirable, especially when combined with World Championship wins at the hands of one of the sport’s most successful young riders.

Andy Barrett, a department specialist, commented: ‘Jorge Lorenzo’s career is already one that has irrevocably altered the motorcycle racing landscape. Since his debut at the age of 15, he has gone from strength to strength, and his duels with former team mate Valentino are legendary have become legendary in the sport. To be offering one of his World Championship-winning machines is truly spectacular, and we are thrilled to be offering this unique piece of racing history.’

The machine is strikingly original, and has remained unchanged and unridden since the end of the 2007 season. World title-winning machines are always a rare treat at auction, but one ridden to victory by such a charismatic and acclaimed champion is truly unique.

Visit bonhams.com/autumnstafford for a preview of the incredible lots consigned to the Autumn Stafford Sale. To discuss any aspect of buying or selling collectors’ motorcycles at auction including valuations for probate, market and insurance, please contact the London office, your nearest specialist, or visit bonhams.com/motorcycles to submit a complimentary auction appraisal request.