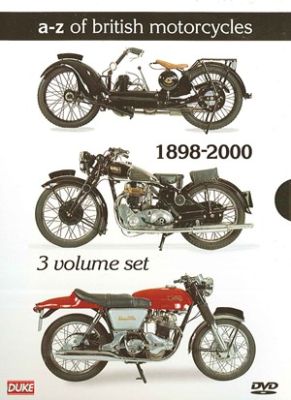 A-Z of British Motorcycles 1898 – 2000 DVD
Never before has the unique heritage of the British motorcycle industry been explored and presented in such a detailed and comprehensive manner. This superbly researched, three part series, collectively features over 500 machines from the National Motorcycle Museum near Birmingham.

More encyclopaedia than entertainment, on each disc the chapter selection enables you to view individual machines in any order. Exclusive studio quality footage, close-ups on points of technical interest and authoritative narrative provide you with an invaluable reference tool and a wonderful visual history of British motorcycles. Here you can enjoy�

The pioneers 1898-1929
The British motorcycle industry led the world in the opening years of the twentieth century and the internal combustion engine was greatly assisting two-wheeled pedal power. Just how strong this industry was in those days is emphasised by the fact that motorcycles from over fifty manufactures feature on this disc.

The post war classics 1950-2000
Throughout the 1950s and into the mid-1960s, the Italian racers were getting the better of British bikes on the track but British still led where it counted – at the cash registers!
This was the era of classics such as the BSA Gold Star, Triumph Bonneville, Vincent Black Shadow, Ariel Square Four and Velocette Venom. Here the machines from these golden years, those which accompanied the downfall of the industry and the latest bikes from the re-born Triumph brand feature.

Enjoy your own personal showroom of two wheeled nostalgia with the a-z of british motorcycles!