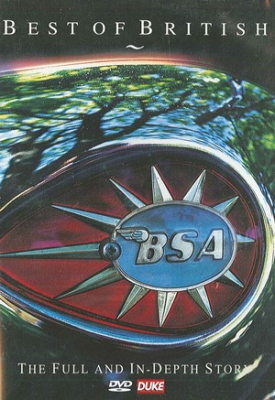 Best of British BSA DVD
This in-depth video tells the full story of the BSA, from its beginnings in the armaments trade of the eighteenth century, through the glory years of their domination of the world motorcycle market, to the final story climax.

At the National Motorcycle Museum we review the greatest bikes to bear the unique Piled Arms trademark, from the Roundtank and Sloper models of the 20s and 30s to the incomparable Gold Stars, Road Rockets and Rocket 3 machines that were the top British bikes of the 60s and 70s. We also visit the Sammy Miller Museum to check out a unique road racer, which could have brought BSA a world championship in the mid-Fifties. The bike never did race, but six-times World Champion Geoff Duke O.B.E tested it and tells us why he is convinced that it could have been a Grand Prix winner.

This DVD features interviews with American rides Bobby Hill, who scored BSAs first Daytona 200 win in 1954 and Dick Mann who repeated this in 1971 alongside team mate Don Emde who took a Daytona 3rd in the same year. Double World Motocross Champion Jeff Smith reminisces about his title wins along with his teammate and BSA competition manager Brian Martin. Brian also talks about winning the Maudes Trophy for BSA as part of a three-man team, covering 5,000 miles around Europe on standard production Star Twin models in 1952. Norman Vanhouse, Gold Star specialist Eddie Dow and Chris Vincent also remember their BSA achievements and experiences.

Action footage, interviews and authoritative commentary reveal just why the BSA motorcycle will always be regarded as one of the very Best of British.