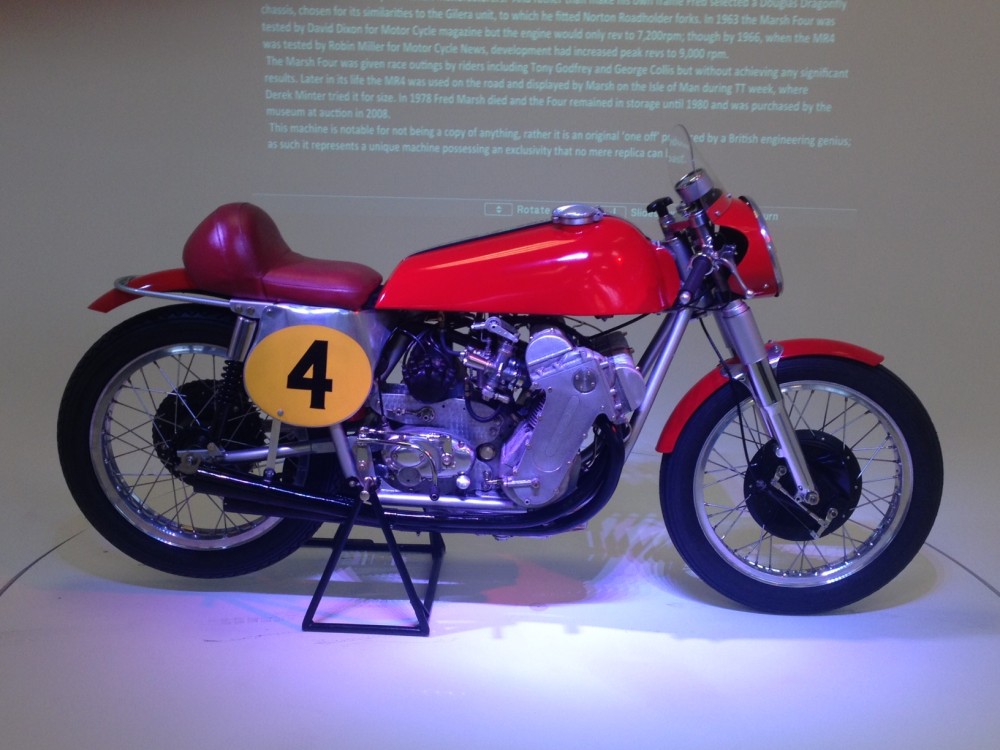 This quite remarkable machine is the product of one even more remarkable man – the legendary Fred Marsh – a dedicated enthusiast best remembered for his home-built, Moto Guzzi-inspired V8. A fitter and turner at the Harland & Wolff shipyard in Southampton, Fred Marsh had witnessed the MV Agusta and Gilera fours’ rise to dominance in the late 1940s/early 1950s and, in the absence of a response from the British motorcycle industry, set about creating his own version.

Fred Marsh started design work on the four as early as 1953, though the machine would not reach running condition until 1962. With the exception of suitably modified Triumph Terrier cylinder heads, chosen partly because of their 75-degree valve angle that permitted the use of MV-type cams, all other parts were designed and made by Fred, including the necessary wooden patterns for all the major castings. Fred would often machine parts on his lathe at Harland & Wolff during meal breaks. However, much of the work was carried out on his own home-constructed lathe, which could be adapted for such tasks as line-boring the crankcase main bearing housings and also end-facing the castings.

Convenience dictated the use of a proprietary gearbox, a Norton unit being chosen, and thus primary drive was by chain rather than the gears favoured by the Italian manufacturers. And rather than make his own frame Fred selected a Douglas Dragonfly chassis, chosen for its similarities to the Gilera unit, to which he fitted Norton Roadholder forks. In 1963 the Marsh Four was tested by David Dixon for Motor Cycle magazine but the engine would only rev to 7,200rpm; though by 1966, when the MR4 was tested by Robin Miller for Motor Cycle News, development had increased peak revs to 9,000 rpm.

The Marsh Four was given race outings by riders including Tony Godfrey and George Collis but without achieving any significant results. Later in its life the MR4 was used on the road and displayed by Marsh on the Isle of Man during TT week, where Derek Minter tried it for size. In 1978 Fred Marsh died and the Four remained in storage until 1980 and was purchased by the museum at auction in 2008.

Now on display in Hall 2 of the museum, this machine is notable for not being a copy of anything, rather it is an original ‘one off’ produced by a British engineering genius; as such it represents a unique machine possessing an exclusivity that no mere replica can boast.

SEE GROMIT & HIS BSA M33 AT THE MUSEUM!
Buy BSA Clothing @ The NMM