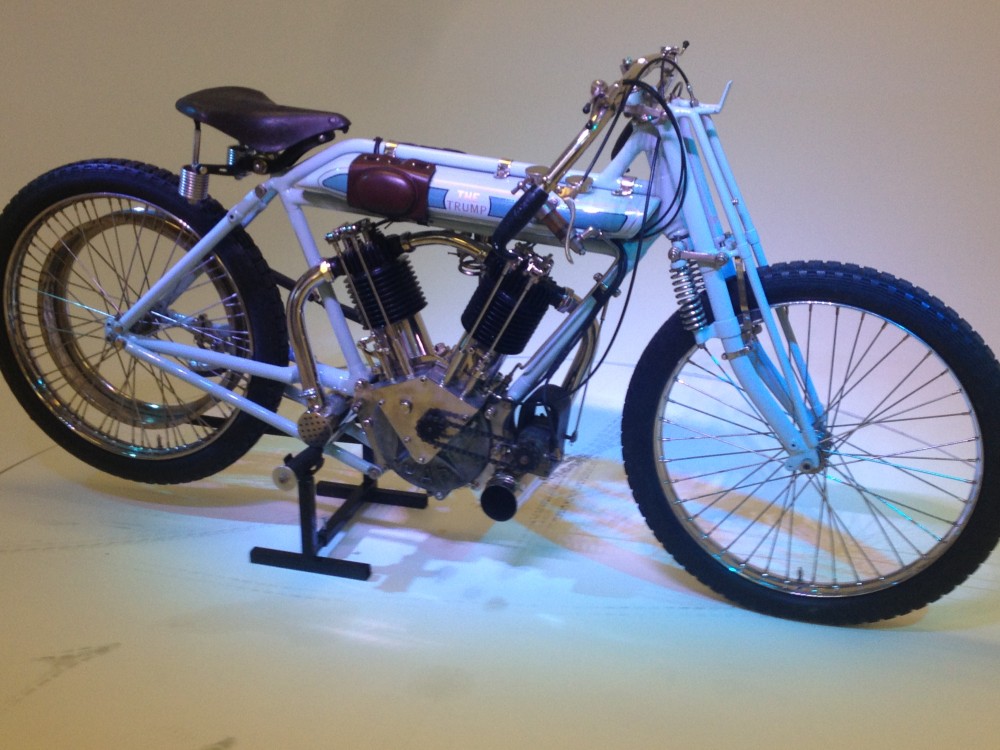 You don’t have to travel to the USA to see the Trump!

This formidable looking 1912 976cc Trump-JAP “90 Bore”  veteran racing machine was manufactured by a firm which came to have a most honourable Brooklands heritage.

Trump Motors Ltd was founded by Francis McNab who produced their first machines around 1906 from a makeshift factory in Liphook, Hampshire. With the opening of the famous Brooklands circuit McNab recruited his cousin, Angus Maitland, and the firm re-located to premises adjacent to the circuit in Byfleet, Surrey.

As the firm grew, Colonel RN Stewart was brought in as managing director and since McNab, Maitland & Stewart had all enjoyed racing success a  Brooklands on Trump machines, the firm also maintained a facility in the paddock area. Interestingly, the firms racing efforts were sponsored by the Duke of York whose royal patronage gave Trump a degree of prestige. Latterly the Trump works was based in Lombard Street, Birmingham with the final machines being produced in 1923.

This particular Trump-JAP “90 bore” racer was campaigned by Colonel Stewart until Guy Fawkes day 1921 after which he swapped to a Trump- Anzani 8 valve.

A Brooklands bike built as one of a limited  number specifically for the track, the JAP engine fitted to this machine is in fact the forerunner of the 90 bore, that being a production engine with a bore of 90mm.

This engine is an experimental 85mm x 85mm unit made as a small batch by JAP and based upon their V8 aero engine top end grafted onto a twin cam side valve bottom end.