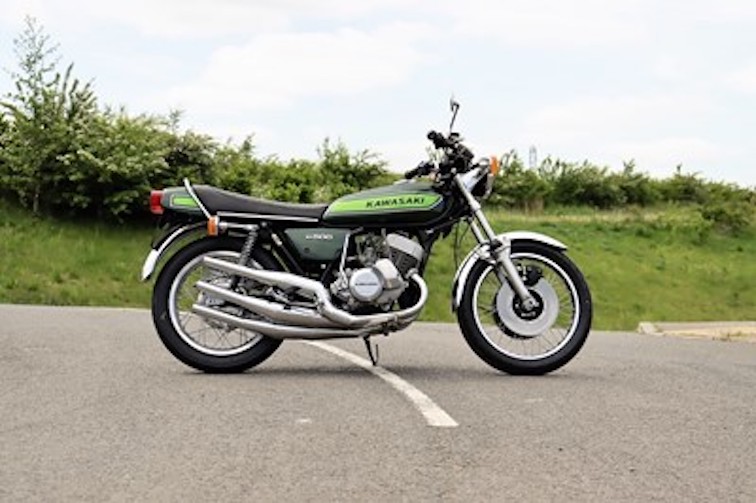 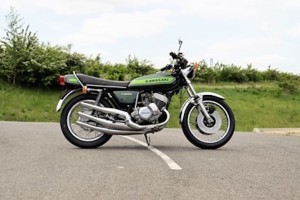 This stunning machine, one of just three built and confirmed by the world-famous Allen Millyard, heads up the next H&H Classic bikes sale at the National Motorcycle Museum on July 20th in Solihull.
Built for one of his dear friends and made into an 850/5 in 2005 and known as the KH FIVE, like most of Allen’s specials they use his signature technique of adding an extra cylinder (or two).The other two KH Fives are in the United States
This well-known machine has been seen and displayed in multiple magazines, shows and Facebook groups.
Allen Millyard built this 850cc five-cylinder bike in 2005 from a pair of Kawasaki KH500 triple engines. The crankcases were cut by hacksaw into sections and welded back together as a five-cylinder crankcase.
He stripped down two triple crankshafts and reassembled them as one five-cylinder crankshaft, at 1-5-2-4-3 interval. The gearbox output shaft was extended to allow the engine to be fitted centrally in the frame. The engine was then ready for assembly with one centre cylinder, two left-hand cylinders, and two right-hand cylinders. The oiling system was modified by joining a pair of three-cylinder oil pumps together.

Mike Davis of H&H Classics, says: “When Allen builds his machines, he likes to retain the original lines and features wherever possible. Stock paintwork was applied by Vintage car painter Neil Howarth. The classic parts were cleaned. all brightwork parts were re-plated and the frame was powder coated.”

“The last job was to make the five steel expansion chambers, which were all done by hand. The cones are first made in then traced around onto a steel sheet. Allen used tin snips to cut the sections, then hand-rolled around a piece of scaffold tube and gas welded them together. Once fitted to the bike, they were chrome plated.”

Interest in this bike is expected from around the world. Other interesting bikes in the sale included the following four:
1923 Lea Francis 600cc Sports (pictured) is one of just two known examples. Estimate £18,000 – £22,000.
Fully restored to show winning standard it was last on the road in 1928 and stored until 17 years ago. It has been restored using all the original parts and is an ideal Banbury machine or entrant for other VMCC events. 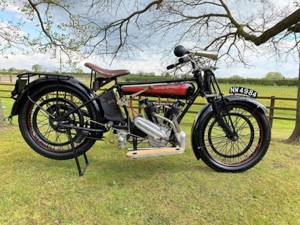 Records show approximately 1,500 machines were made from 1913-1924 and with around 34 machines left and with just two 600 sports models.
It comes with an old RF60 logbook on files and some restoration photos. Light recommissioning will be required before use due to storage.
The Coventry based firm of Lea Francis had been established in 1895 by Richard Lea and Graham Francis in order to manufacture bicycles quickly gaining a reputation for quality, however, a foray into car manufacture during 1903 when a vehicle using a three-cylinder engine was offered, did not meet with the success that had greeted their bicycles. This may explain the firm’s comparatively late entry into the world of motorcycle production in comparison to many of its rival cycle manufacturers. Development work commenced during 1911 culminating in the release during 1912 of a 3 1/4hp model with a JAP vee twin. As had been the case with their cycles, Lea Francis motorcycles quickly earnt a reputation for quality.
Then as now, celebrity owners could greatly enhance product standing and Lea Francis was to benefit from George Bernard Shaw’s purchase of one of their motorcycles, a 592cc inlet over exhaust M.A.G vee twin-powered example. Between 1912 and 1924 approximately 1500 Lea Francis motorcycles are believed to have been built using proprietary engines supplied by the Swiss M.A.G (Motosacoche) concern and J.A.P housed in their own frames. Motorcycle production ceased during 1924 enabling Lea Francis to concentrate their efforts on the production of their newly introduced Meadows-powered light car that, unlike its predecessor, was proving to be a success.
The motorcycle offered was first registered on the 10th October 1923 to Mr. Thomas Whitwell Dresser, it subsequently passed to the late William Henry Fenby, the founder of the North East section of the Vintage Motorcycle Club and instigator of the Nostell Priory Collection where it spent most of its life until now. It was purchased by the last owner at the Nostell Priory Collection. Powered by a M.A.G inlet over exhaust vee twin with a three-speed gearbox, it was last used on the road in 1928.
This 1927 Norton Model 19 (pictured) has been in a 35 year ownership and is estimated at £16,000 – £18,000. 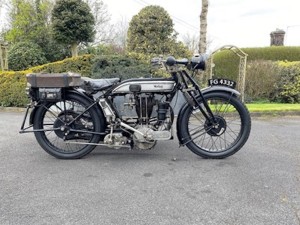 Formerly owned by the late Geoff Davies, past president of the VMCC. this 1927 Norton model 19 is a rare survivor today of this model. It was used and very much enjoyed by Mr Davies on many rallies over many years including Europe.
Fitted with a very rare Norton sidecar and chassis, and restored by him, it is a fast vintage machine that is highly original including matching crankcases and Barrell. It has not used in the last year and will need checking over before use. It comes complete with a file of paperwork current V5C.
1963 BSA Rocket Gold Star (pictured) in its current ownership for 39 years is estimated at £16,000 – £18,000.
Lovingly restored over many years it has been in its current ownership since 1984 and is an all correct numbers machine.
It has Akroni aluminum rims fitted and has an SRM bottom end restoration including rods and uprated oil pump. It comes from a good home where it has been well cared for. 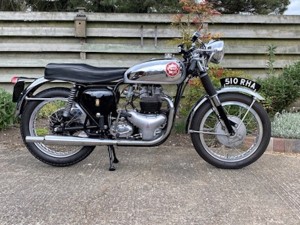 It is being sold complete with various paperwork, handbooks, and spares list and a current V5 and original RF60 logbook
The BSA Rocket Gold Star (pictured) was a 646cc air-cooled parallel twin motorcycle produced by Birmingham Small Arms Company at Small Heath, Birmingham. Launched in February 1962, it was one of the final range of A10 twins, using a tuned A10 Super Rocket engine in the double-downtube Gold Star frame. Rocket Gold Star production ended in 1963 due to the development of new unit construction successors, designated as A65 in the 650cc capacity.
Lovingly restored over many years, this is an all correct matching numbers Rocket Gold Star machine that has been in its current ownership since 1984. With Akroni aluminum rims fitted the bike has had an SRM bottom end restoration, including rods and an uprated oil pump. The motorcycle has come from a good home and has been well cared for. Accompanying the motorcycle is various paperwork, handbooks and a spares list. There is a current V5C and an original RF60 logbook.
This 2017 Avinton Collector GT Rare limited edition muscle bike (pictured) is estimated to sell for £23,000 – £27,000.
A rare made to order Avinton Collector GT muscle bike of 1647cc S&S vee twin putting out 120 bhp and 120 ft/lbs torque was assembled using only the best possible chassis components. It has only 700 miles and is UK registered on a current V5C. 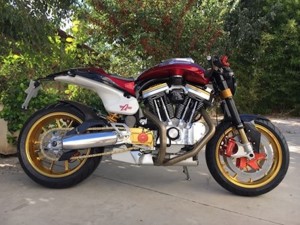 The Avinton Collector GT takes the concept, designed by Carroll Shelby for the AC Cobra, of extreme power, handling and balance in a small package that translates into a gorgeous hand built two-wheeled muscle-bike. As a child, French engineer Cedric Klein saw the original version of the AC Cobra and this image lodged in his head so when in 2011 he acquired Avinton Motorcycles the car became the inspiration for its future projects. The company is defined by its exceptional muscle bikes thanks to the passionate, talented, and knowledgeable craftsmen that bring each one to life. More like an artist’s studio than a factory, the assembly workshop plays a central role in the daily life of the brand with the bikes manufactured in Sommieres in the south of France. The workshop is where you’ll find the perfect balance of modernity and tradition, assembled completely by hand these bikes are a modern example of excellent craftsmanship that has become increasingly rare over time.
Power is provided by an S&S Super Stock 1647cc motor that puts out 120hp and 123 ft/lbs of torque giving the Avinton GT a claimed top speed of over 160mph. It breathes through a Keihin 41mm flat slide carb with a Vortec air vent, located on the top of what would traditionally be the fuel tank, that’s electronically controlled to open up at 2300rpm.
Buyers were offered a selection of 3 riding positions and then a choice of 6 different specifications, making no 2 bikes alike. He chose the Collector GT version with the slightly higher handlebar position for comfort with the highest spec on all other components, he reports that whenever he has had a run out on the bike it always draws a crowd. Very few of these bikes were ever made and with type approval regulations being as they are may never get made again. UK registered it comes supplied with current V5C.
THINKING OF DONATING TO THE NATIONAL MOTORCYCLE MUSEUM?
ISLE OF MAN TT HISTORY CELEBRATED IN A BRAND NEW BOOK