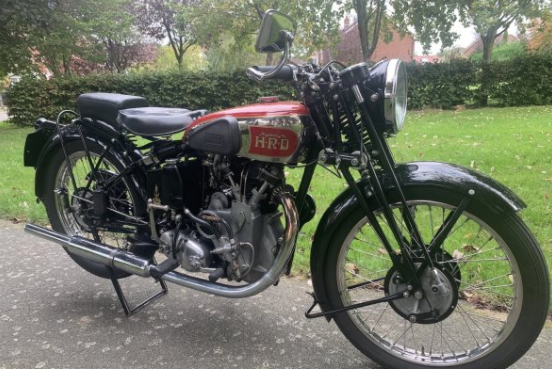 FOR SALE WITH H&H CLASSICS, AT THE NATIONAL MOTORCYCLE MUSEUM,

This beautifully restored 1939 Vincent Series A was first owned by Gloucestershire architect, Peter Falconer, whose job at the outbreak of WW2 was to convert mills into munitions factories – and it was on this bike that he travelled the country overseeing that task. He kept the bike until 1947.

Peter Falconer, who died in 2003, aged 86, was an architect with a notably varied practice ranging from designing breweries and distilleries to overseeing the remodelling of Highgrove House for the Prince of Wales

Now this wonderful piece of British automotive history with links to WW2 is for sale with H&H Classics on November 14th at the National Motorcycle Museum, for an estimate of £40,000 – £50,000.

New in 1939 and then during the war with its headlamp shroud driven by its first owner Peter Falconer.

It is not known who Peter Falconer sold the bike to, however the owner from 1953 –1955 contacted the current owner’s father through the Vincent owners club. They met up in the early 2000’s and he told him that he had bought the bike from an apprentice at the Vincent factory. He said that the bike had gone back into the factory to have alloy mudguards and a post war style dual seat fitted. You can see these in the photograph of him with the bike. 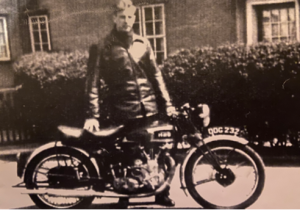 An original buff logbook and current V5c picks up all owners from 1955 onwards.

Mike Howard bought the bike in 1999 and set about restoring it, as it was in very poor condition – in bits in a crate. The engine was painstakingly rebuilt by Bob Dunn and the cycle parts restored by Mike Howard.  After 10 years of restoration the bike was finally put back on the road in 2009.

The current owner, Andrew Howard, Mike Howard’s son rode the motorcycle to The Isle of Man Classic TT in 2013, with his father on another classic bike.

Speaking about this special motorbike, Mark Bryan, Head of Motorbike sales at H&H says: “This is a very collectable bike. The Series A is the Jewel in the Crown of Vincents, it’s the one the marque’s fan-base are most keen to own.”

REVVING IT UP…..AT THE NMM
We Miss You…