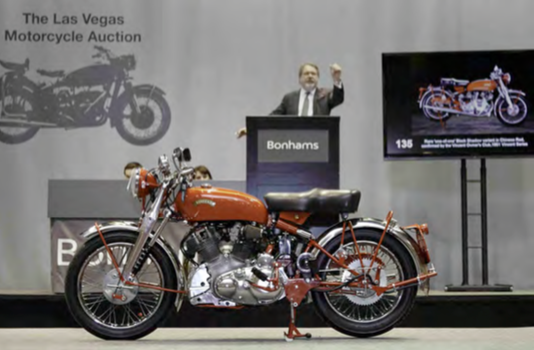 On Thursday, January 7th, in the ballroom of Bally’s Hotel & Casino on the famous Las Vegas Strip, Bonhams hosted its most successful Las Vegas Motorcycle Auction to date with over $4.8-million sold.

The sixth annual sale attracted a near-capacity room of bidders from around the world augmented by bidders on the telephones and internet.

Vincent took tops position as enthusiasts rushed to bid on desirable models. The standout by far was the rare, one-of-one built 1951 Vincent Series C “White Shadow” in Chinese Red. After an exciting start from a host of bidders in the audience, a long and spirited match ensued between two bidders on the telephone, one in Australia and one in Great Britain. In the end, it was Britain winning the prize at a sum of $434,000 – a new world record for a Shadow model.

Said Nick Smith, Bonhams US Head of Motorcycles, “It’s obvious from the results that the rare, unusual and original machines stand out and that people are willing to invest $100,000+ on good quality motorcycles. One of the auction’s darlings was the incredibly original 1911 Triumph 3 ½ HP 500. Owned for many years by a southern California gentleman who left it to his son when he passed away, who in turn left it to his brother when he passed away, the machine had a spectacular level of patina and originality and garnered more interest than just about anything else in the sale.  An aggressive low estimate and ‘no reserve’ listing brought worldwide attention and a sale price of over $20,000.”

“We’re delighted with the results here in Las Vegas,” said auctioneer and Bonhams co-chairman Malcolm Barber. “We had lots of new faces bidding, broad international interest and better than ever results overall. It was a very good day.”