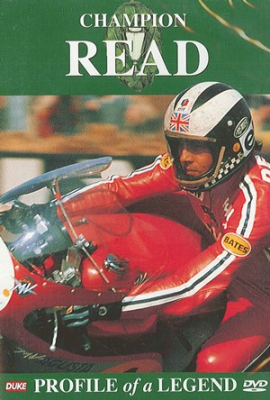 DVD Champion Read
British racer Phil Read is undoubtedly one of the all-time greats in the world of motorcycle sport. His career spanned over 25 years and during that time he won a staggering 54 Grand Prix and became World Champion no less than 8 times. His command of motorcycles was supreme and his racing skills phenomenal.

Read has always been a controversial character who is not afraid to speak his mind, in 1972 he claimed the TT races were too dangerous and he would never compete in them again. But he changed his mind in 1977 and made a winning comeback. His opinions could not detract from his natural abilities however, and even his most ardent critic would agree that he is one of the most successful GP racers ever. He rode against many other greats such as Mike Hailwood, Jim Redman, Barry Sheene, Giacomo Agostini and Bill Ivy.

This comprehensive tribute features excellent racing footage from the 60s, 70sand 80s, comments from Tommy Robb, Geoff Duke and other stars of the era and interviews with Read himself, which makes for compelling viewing.