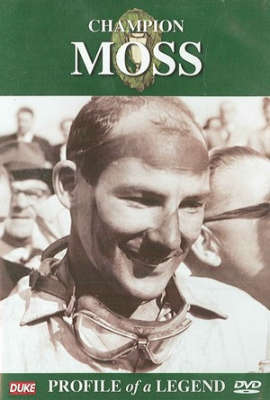 DVD Champion Stirling Moss
We make no apology for having Sir Stirling Moss – the greatest driver never to have won a World Championship – as a subject in The Champions series. He is undoubtedly one of the all-time greats of motor racing and many consider his name almost synonymous with the sport itself.

Between 1948 and 1962, he won 16 Grand Prix out of 66 started, drove Aston Martins, Vanwalls, Coopers, Maseratis and Mercedes to name but a few, won the Mille Migila in 1955 at an average of over 100mph and generally drove just about anything, anywhere, faster than just about anybody else.

This is his story, told in his own eloquent words, and liberally illustrated with rare archive material – much of it previously unseen. In fact, we feature action footage of Moss driving no less than 33 different models of racing car, a reflection not only of Stirlings extraordinary career but also of the nostalgic treats that await the viewer of this DVD.

Even the informed enthusiast will discover new facts Classic Cars