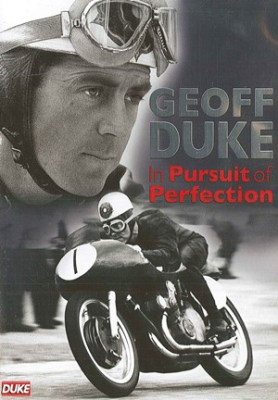 DVD Geoff DUKE in pursuit of perfection
Geoff Duke O.B.E is the original superstar of motorcycle racing, a sportsman whose success, skill and personality ensured he became a household name.

In Pursuit of Perfection is the most comprehensive and revealing film ever made about this ground breaking motorsport icon and British sporting hero.

The proud Lancastrian scored 33 Grand Prix wins in his career which spanned little more than a decade and a stunning six World Championships in just five years. He demonstrated his skills off-road and on-track, on two wheels and on four, he smashed records, set new standards and beat his European rivals in their own back yards.

During extensive interviews with Mick Woollett to commemorate his 80th birthday, Geoff recalls everything from his very first motorcycle to his sudden retirement. Offering and unparalleled insight into his Isle of Man TT wins, glories in 350cc and 500cc World Championship racing and what was really happening in the politically-motivated world of 1950s motorsport.

Throughout are previously unseen photographs and rare archive footage showing Geoffs greatest races on the TT Mountain course, Assen, Monza, Spa, Olivers Mount and other classic circuits.
He details the Norton years, the switch to Gilera, his time with Aston Martin and his stock decision to quit racing in September 1959, despite taking three wins in his final professional outing.

Geoff recalls friends and rivals, figures like Hugh Viney, Les Graham and Artie Bell, and opens his heart about the controversial ban and injury which prevented him challenging for the World Championships in 1956 and 1957.

We are reminded of the principled gentleman who would stand up for colleagues and the superstar who would become Sports Personality of the Year and be awarded the Order of the British Empire.
Above all, we are reminded, in action footage, rare photographs and the pin-sharp recollection of the man himself, of the racer.
Geoff Duke – a racer always in Pursuit of Perfection.