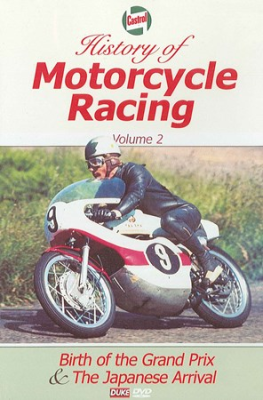 History of Motorcycle Racing vol2 DVD
This is the second volume of the definitive history of one of the worlds most exciting sports.
Award winning motorcycle film producer, David Wood, utilises his extensive archive, plus material from scores of other sources, modern day interviews and race coverage, to present an unsurpassed, entertaining and historically significant record of motorcycle racing.

In Birth of the Grand Prix, we trace the 40-year history of World Championship motorcycle racing. The works teams of Norton, Gilera, Moto Guzzi, MV Agusta, BMW, AJS and others are featured during the glorious 1950s when up to twenty multi-cylindered four-stroke machines would be on the grid at a GP. Then two-strokes arrived on the scene and soon had to be taken seriously as the sights and sound at the Grand Prix circuits the world changed.

The Japanese Arrival includes footage of early Japanese appearances in Europe and features for example , the 20,000rpm 50cc racers that screamed around the TT course in the early 1960s, the fabulous 250cc Honda Six ridden by Mike Hailwood, the 125 and 250 V4 Yamahas ridden by Ivy and Read and many more racing marvels. The post-war growth of the Japanese motorcycle industry and their eventual domination of the road racing scene is outlined.