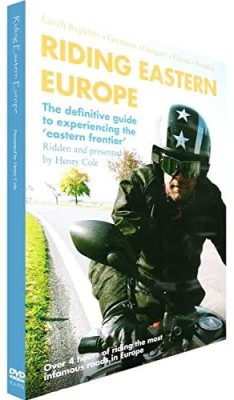 If there is one part of Europe which is steeped in history, mytholog, cultural diversity  and as yet undiscovered by the western tourist… it has to be the East.

Henry Cole leaves his Harley Davidson in the USA after riding Route 66 and climbs aboard the lessromantic German produced ‘MZ 1000@ to embark on a journey revealing the true delights anddangers of life on the roads of Eastern Europe.

Starting at Leipzig in Germany, he rides through Poland, the Czech Republic and Slovakia,ending three thousand kilometers later at Budapest in Hungary.

Henry,s journey reflects the true diversity of each country and their contrasting roads to democracy.From modern cities like Prague in the Czech Republic, to rural Hungarian peasant life; from the stunning beauty of the ancient city of Wroclaw in Poland, to the amazing monastery made from human bones in Slovakia; from the religious festivals and fairs celebrated every weekend in Bratislava,  to the enchanting and captivating folk dancing in Hungary.

Henry delivers the definitive guide to riding this amazing route, finding the most lavish and idiosyncratic places to stay and most extraordinary attractions to see.

Tis trip portrays life in all its forms along Europe’s eastern frontier, whwere the roads are fraught with danger,from being attacked by highway robbersto dodging ‘ox & Carts’ as they crawl along the motorways.  However the stunning scenery and unspoilt beauty makes this epic journey an utterly unforgettable experience!